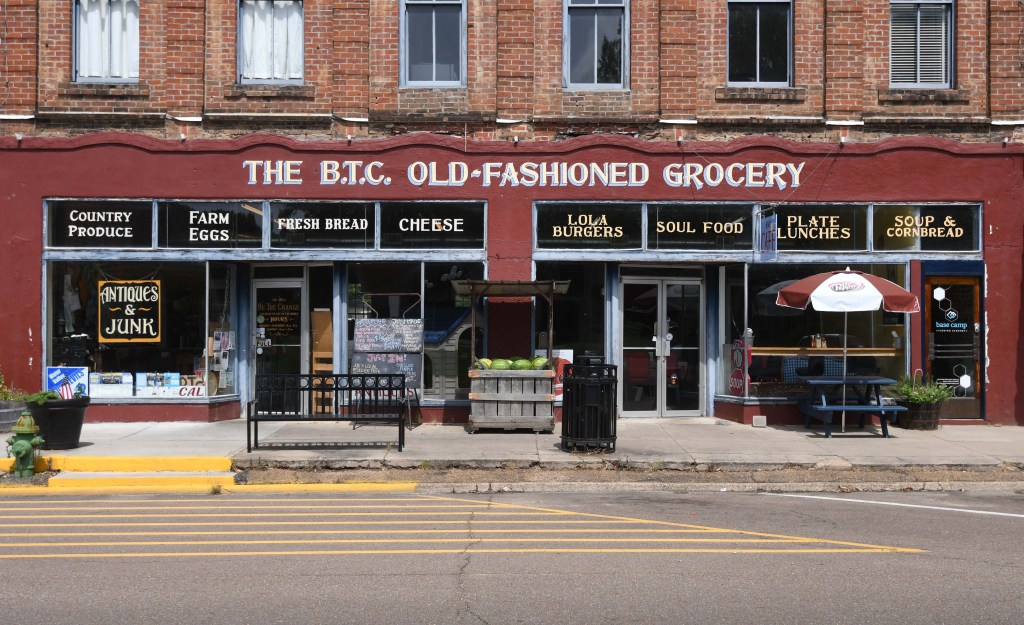 In just over seven years, The BTC Old-Fashioned Grocery already seems like it has been in Water Valley for generations.

From the beginning, the establishment set out to build a strong bond with the community, but they’ve been recognized nationally, too.

The story began in May 2010, when BTC founder Alexe van Beuren decided to open up the grocery in a building that has been on Water Valley’s Main Street since at least 1871.

Van Beuren, a Virginia native, says the idea came to her after she realized that she didn’t have a place where “(she) wanted to buy food.”

“Although the Piggly Wiggly is an amazing grocery store in many ways, it wasn’t really everything that I wanted to have in my town where I loved living,” she added.

The BTC is housed in a wide brick building with high ceilings, an ideal space for a grocery store and cafe. Kagan Coughlin, van Beuren’s husband, renovated the structure and owns the building.

The grocery section of The BTC carries everything from fresh baked goods to local, seasonal produce to fine pastas and grass-fed beef. Another part of the building is sectioned off for a small antique store and a third space is dedicated to a small café. 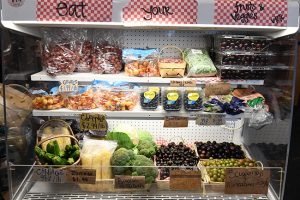 Fresh fruits and vegetables are among items for sale at BTC Old-Fashioned Grocery in Water Valley. (Photo/Bruce Newman)

“BTC” originates from the first three words of a quote attributed to Mahatma Gandhi  “Be the change you want to see in the world.”

“That’s still very much a part of who we are in this business,” Grimes, who runs the Dixie Belle Café inside the BTC, said. “We try to give back more than we take; from the community, to the town, to the city.”

Grimes first walked into The BTC in 2011 and has been integral to the store ever since.

Originally from Oxford, Grimes was the executive chef at the Downtown Grill, the spot now occupied by Bouré, for 13 years. She had briefly lived in Houston, Texas until she eventually found her way back home to North Mississippi.

“It just so happens that I had some friends here who let me stay with them,” Grimes recalled. “They said, ‘our friend Alexe just opened this grocery store and I think she’s trying to do breakfast, she may need some help.’ It was a Saturday and I walked down here and introduced myself to her. She basically said do you know how to use a meat slicer and I said, ‘yes, ma’am.’ She asked, ‘can you start right now?’” 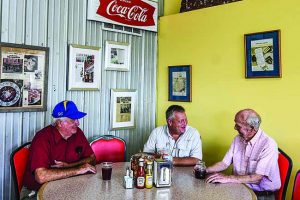 Grimes was invited by van Beuren to come back the following Monday and that’s when the pair’s fruitful partnership and friendship began. Grimes became an official co-owner in 2015, the same time that The BTC underwent renovations to include the café.

Though Grimes’ training is in fine dining, she refers to herself as “a Mississippi girl at heart.” And it is more than evident in the food she serves at the Dixie Belle Café.

“I try to have something for everybody on my menu,” Grimes said. “There are some high-end things, but there’s also a sandwich that’s fried bologna and cheese. There are vegan and vegetarian options. I don’t want anyone to walk in here and look at my menu and say, ‘there’s nothing here for me.’”

The chef also uses the names of Water Valley locals on her menu, another way in which The BTC forges a connection with its hometown.

“They get really excited about it,” Grimes is quick to note.

And don’t underestimate the discriminating tastes of Water Valley’s citizens.

“There are a lot of foodies here,” Grimes said. “I hate it when people think that they don’t have a concept of what good food is. I’ll tell you they absolutely do. And they will let you know if it isn’t good. They’ll come back in my kitchen and say, ‘I didn’t like it.’”

Van Beuren says of her partnership with Grimes that “(they’re) very different, but also very much alike.”

“I think we both want the best for The BTC and for the community,” Van Beuren said. “We operate off that platform and have respect for each other’s areas of expertize. 99 percent of the time, I’d say we work really well together. The other one percent is little things and we get through it.”

“There are times where we’ll disagree, but we have a policy that if we have an issue, we don’t stew about it,” Grimes added. “We’ll talk it out and find a middle ground that works for both of us and we move on. We both believe that that’s not good for the business. It’s more than just a business for us. Alexe is so passionate about what she does on her side.” 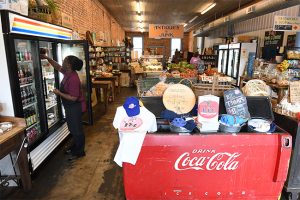 The success of The BTC also benefits the other businesses in town. Saturday is the store’s busiest day, with lines stretching out the door. While at work, the co-owners notice people patronizing the other establishments on the block.

“We have a killer brewery here that has an arcade in it,” Grimes said. “We have an art gallery, we have a drugstore (Turnage Drugstore) that still has a soda fountain. If you’re looking to get out of the rat race, Water Valley on Saturday is a great time. What’s good for one business, is good for all of us. We believe that it’s not one person or one business that makes Water Valley or even just the businesses on Main Street.”

The BTC received national press after a 2012 New York Times article profiled van Beuren and other women renovating homes in Water Valley. She soon received a proposal to write a cookbook, an offer that she and Grimes couldn’t pass up.

“We were very proud of that cookbook because it’s a love story to Mississippi,” Grimes said. “And, more importantly, it’s a love story to Water Valley. For me, it’s a love story about my grandmother. They’re my recipes, but all those words are Alexe’s. The way we collaborated on that was not typical of how anyone else does it, but that’s also mine and Alexe’s relationship, quite frankly.”

After seven years in business, both van Beuren and Grimes plan to make The BTC a lifelong pursuit.

“I think we’d both like to see The BTC live on after we’re gone,” Grimes said. “For me as a chef, I’m 46 years old. I really want this to be the place that I retire from. I’m not planning on going anywhere anytime soon.”

“If you asked us four years ago if we would look exactly the way we do now, I don’t think we would have known,” van Beuren said. “We just keep evolving.”