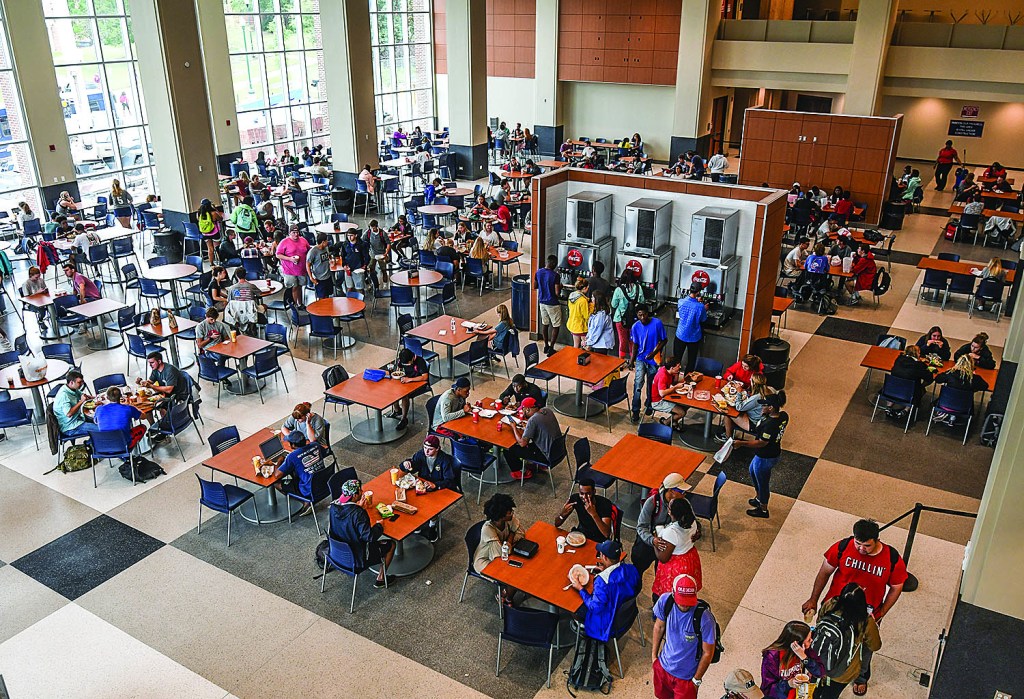 A portion of the Ole Miss Student Union, in Oxford, Miss., on Wednesday, August 30, 2017, has opened for food service. The rest of the building remains under construction.

After nine months of construction, the Ole Miss Student Union is once again open for business.

The opening marks the end of the second phase of construction for the Union, which underwent exterior renovations last year when the building closed and several offices were required to move to other locations on campus in December.

“When the Union was constructed [in the ‘70s] the architecture was completely different than it is now. You look at the previous building with the dark glass that was common throughout, the concrete, and I think our students have quickly realized that how bright it is, how pretty it is. We really like to think of it as a beacon in the center of campus,” Bradley Baker, Director of the Student Union, said.

The renovation has added 73,000 square feet to its total, with the food court nearly three times the size of the former layout, Baker said.

“We can seat nearly 400 people in the food court now,” Baker said.

Unexpected delays in construction required the Union’s opening, initially scheduled for Aug. 21, to be delayed until Aug. 29.

While other renovations are still on going — and on track for the completion date of early 2019 — in just two days of being open for business, the Student Union has created a buzz on campus, Baker said.

“The transformation was evident (on campus). We could see on live cams that other food service locations weren’t very busy (on Wednesday). but the Union was flooded with people,” Baker said. “It was definitely cool to see the students taking pictures and getting on social media, even just FaceTiming people to show them what it looks like.”

While the food court and the main lobby are open for students, faculty, and visitors, other areas of the Union remain off limits as renovation efforts continue, including the entire lower level.

The Student Union will also undergo smaller transformations in the coming weeks, as construction crews will work overnight to complete a few smaller projects in the $59 million renovation.

“Those projects are anything from installing LED lights to the video boards and televisions. We have some railings and other things that need to be installed, as well. There will be constant changes over the next couple of weeks, and I think when the final product comes out they’ll be even more amazed than they already are.”

The Student Union features expanded choices in the food court, with  Chick-fil-A, Panda Express, Qdoba, Which Wich and McAlister’s Deli — which has a dedicated restaurant on the second floor, the only kind on a college campus — among the selections.