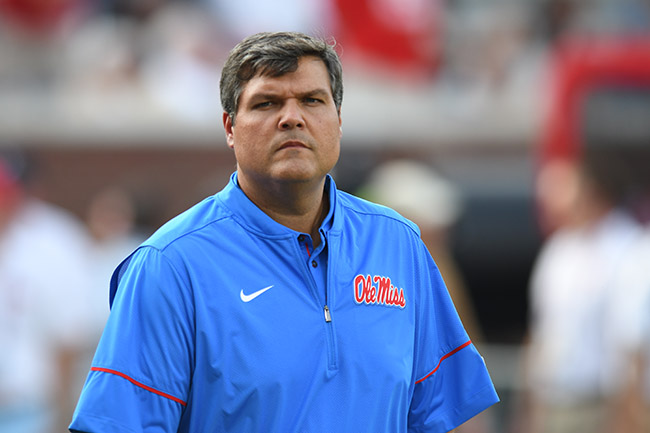 Ole Miss tacks on another with a two-yard run by D’Vaughn Pennamon. On the drive A.J. Brown set a new school record for most receiving yards in a game with 233. Ole Miss 47, South Alabama 13 11:41 4th Quarter

The game is beginning to get out of hand. Patterson hits Lodge for a 14-yard touchdown pass, his fourth  touchdown pass of the game. Ole Miss 40, South Alabama 13 2:29 3rd Quarter

After back-to-back punts from both teams, South Alabama went 56 yards on 9 plays to get inside the Ole Miss five yard-line. But once again the Rebels defense holds and forces the Jags to kick a 20-yard field goal. Ole Miss 26, South Alabama 13 5:11 3rd Quarter

The Rebels create some distance as AJ Brown proves how good he is. Brown steals a should have been interception out of a USA defender’s hands and takes it 77 yards for his second touchdown in as many drives. Brown now has seven catches for 189 yards. Ole Miss 26, South Alabama 10 12:07 3rd Quarter

Ole Miss starts the second half like they did the game. Two plays into their drive, Patterson hits AJ Brown for a 71-yard touchdown pass. Wunderlich missed the PAT. Ole Miss 19, South Alabama 10 14:27 3rd Quarter

Ole Miss has a 13-play drive that goes 67 yards, but once again stalled in the red zone. Gary Wunderlich makes his second field goal of the game, this one a 29-yarder. OleMiss 13, South Alabama 10 :32 2nd Quarter

On Ole Miss’ next drive, Jordan Wilkins fumbles the ball and South Alabama recovers at the Rebel 40. The Jaguars cash in with a 30-yard touchdown pass from Gavin Cole to Jamarius Way to tie the game. Ole Miss 10, South Alabama 10 5:09 2nd Quarter

A South Alabama drive that started at their 2 yard-line stalled at the Rebels’ 3, but the Jaguars took advantage of a porous Ole Miss defense to pick up all seven of their first downs that drive. Jags settle for a 20-yard field goal. Ole Miss 10, South Alabama 3 7:35 2nd Quarter

The Ole Miss offense stalls in the red zone and is forced to resort to a 19-yard field goal by Gary Wunderlich. Ole Miss 10, South Alabama 0 2:15 1st Quarter

Ole Miss stays aggressive on their second defensive series as AJ Moore gets a 15-yard sack on third down to force another Jaguars punt. South Alabama has -9 yards in two drives.

It was a 3 and out for South Alabama, after a four-yard loss on first down.

Ole Miss won the toss and deferred to the second half. The Rebel defense will get tested first in 2017.

We’ll have live updates here for Ole Miss vs. South Alabama to check back at game time for scores and highlights.

The last month for Matt Luke has been a whirlwind as he adjusts to life as Ole Miss; new head coach.

He’ll take a big step Saturday toward figuring out if the transition has been a success. That’s when Ole Miss hosts South Alabama in the season opener for both teams.

Luke knows it will likely be an emotional moment: The 40-year-old has deep family ties to north Mississippi. He was an offensive lineman for the Rebels in the 1990s and his brother and dad also played for the school.

Here are other things to watch when the Rebels host the Jaguars on Saturday:

WILKINS’ RETURN: Ole Miss hopes its running game will get a boost from the return of Jordan Wilkins. The senior missed all of the 2016 season because of an academic issue after running for 379 yards and four touchdowns as a sophomore. He’ll be the starter this season, though backups D’Vaughn Pennamon, Eugene Brazley and Eric Swinney could see time.

SHEA THE SOPHOMORE: Ole Miss quarterback Shea Patterson started three games in November last season, throwing for 880 yards, six touchdowns and three interceptions in a mostly impressive freshman debut. More is expected from the sophomore, though it remains to be seen how he’ll bounce back from the departure of Freeze, who was very close to the quarterback and his family.

NEED SOME DEFENSE: The Ole Miss defense hopes to bounce back from a brutal season. The Rebels gave up 34 points per game last season, which was the worst mark in the Southeastern Conference. Ole Miss will be led by a veteran defensive line that includes Marquis Haynes and Breeland Speaks.

UPSET SPECIAL: South Alabama is a 23½-point underdog on Saturday, but it would be unwise to say the Jaguars don’t have a chance. Facing similar odds last season, South Alabama stunned Mississippi State 21-20 in the season opener. The Jaguars overcame a 17-0 halftime deficit in that game.

JOHNSON RUSHING FOR RECORDS: South Alabama running back Xavier Johnson needs less than 400 yards rushing this season to become the school’s all-time leader in the category. Kendall Houston is the current leader with 2,587 yards rushing from 2010-14.