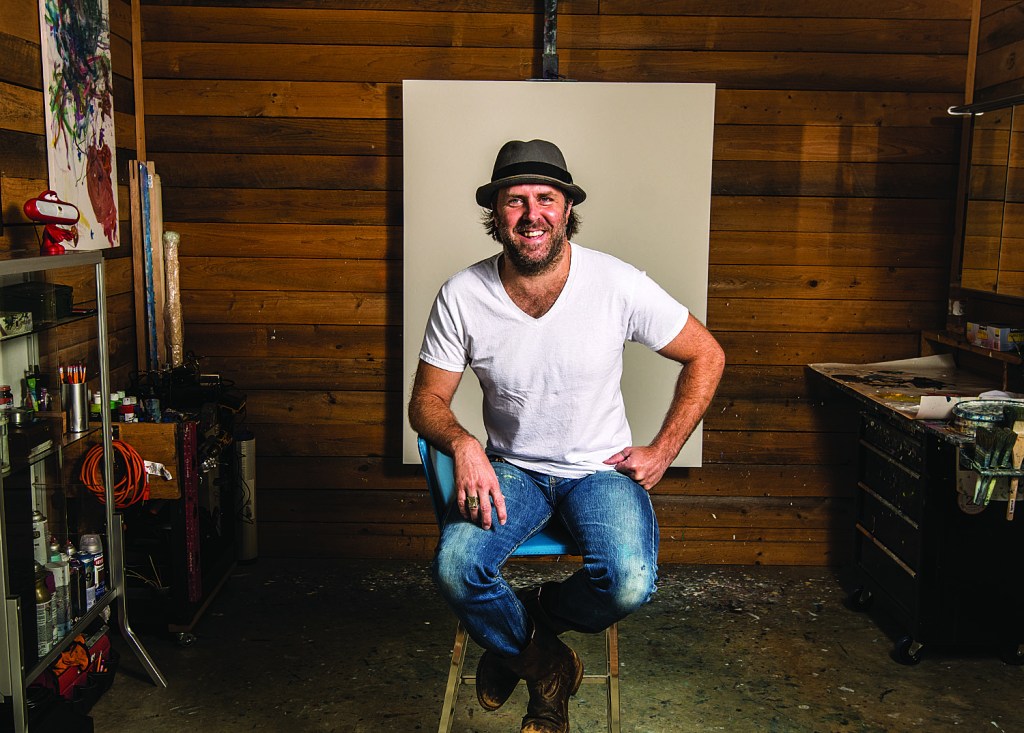 Bradley Gordon is a painter with a studio near Water Valley, Miss., on Wednesday, August 30, 2017. (Photo/Bruce Newman)

Artist Bradley Gordon sees the South in technicolor. Just look at one of his paintings and you probably will, too.

Gordon’s work focuses on animals and natural motifs that are prevalent in the region as he breathes new life into these classic subjects.

At his rural studio in Water Valley, Gordon lives in harmony with his subjects and gets a firsthand glimpse at them.

Born in Clarksdale, the artist grew up surrounded by nature on his father’s cotton farm.

“It probably made me who I am today,” Gordon, 39, said, thinking back on his Clarksdale days. “I grew up in the middle of nowhere. There wasn’t a lot of other kids in the neighborhood to play with. I was always making things. I was always building stuff. I was really in touch with all of the wildlife. I stayed in the woods, had motorcycles and a little Jeep and free roamed.”

After taking preliminary art classes during his elementary school years, he knew he wanted to pursue a career in the field when he got to high school. He later graduated from Ole Miss with a degree in art education in 2001. After college, Gordon found himself overseas in Taiwan and Japan for four years where he taught and painted on the side.

When he moved back to the States in 2010, Gordon decided to open a gallery in his native Clarksdale.

“I was painting 12 hours a day at that point,” the artist said. “It was then that I was able to get on my feet as a painter and at least figure out the direction I was going to go. I had painting shows in Taiwan, but never a lot of money. I wasn’t paying the bills doing it. When I got back to Clarksdale, it was gradual. I got to the point where I didn’t have to do lessons anymore and started painting full-time.”

Gordon says that his work overseas featured a lot of “human forms” and “focused on the superstitions of the culture and religious beliefs.” Upon his return home, his artistic focus shifted.

“I had an idea for a show called ‘Coming Home to the Delta’ and wanted to do a series of all these animals I grew up chasing around in the woods,” he said. “That was the first time I ever painted animals like this. It was then that things clicked and I realized this is what I’m supposed to be doing.”

In Gordon’s studio, his impressive portrait of a blue-tinged buck hangs on the wall. It’s no coincidence as this is one of his favorite (if not, favorite) animals to paint. It’s also the first painting he sold at a show.

“I still think of them as the king of the Delta,” Gordon remarked. “They’re the lion of the South. They’re just fun to paint- such powerful, cool looking creatures.”

It’s hard to coin a term for Gordon’s saturated, geometric paintings of animals. Even the artist himself has trouble coming up with a phrase for it.

“I don’t know that I have a style,” he said. “I think every artist- whether you’re a musician or painter or whatever the genre- you start out a point where you copy the people you love. You borrow from them and take from their style and somewhere along the way, if you do it enough, hopefully, you stumble upon something that’s your own.”

He said that some people compare it to paint-by-numbers (and even children are quick to point this out to him), but his work is far more complex.

“I love how things move- patterns and movement of the brush strokes within these forms,” Gordon said. “I love these animals, I love to paint and I love making things. It’s really simple. I’m inspired by home and where I grew up. At the end of the day, I like to paint cool things to look at.”

Gordon’s paintings can be viewed and purchased at bradleysgordon.com.