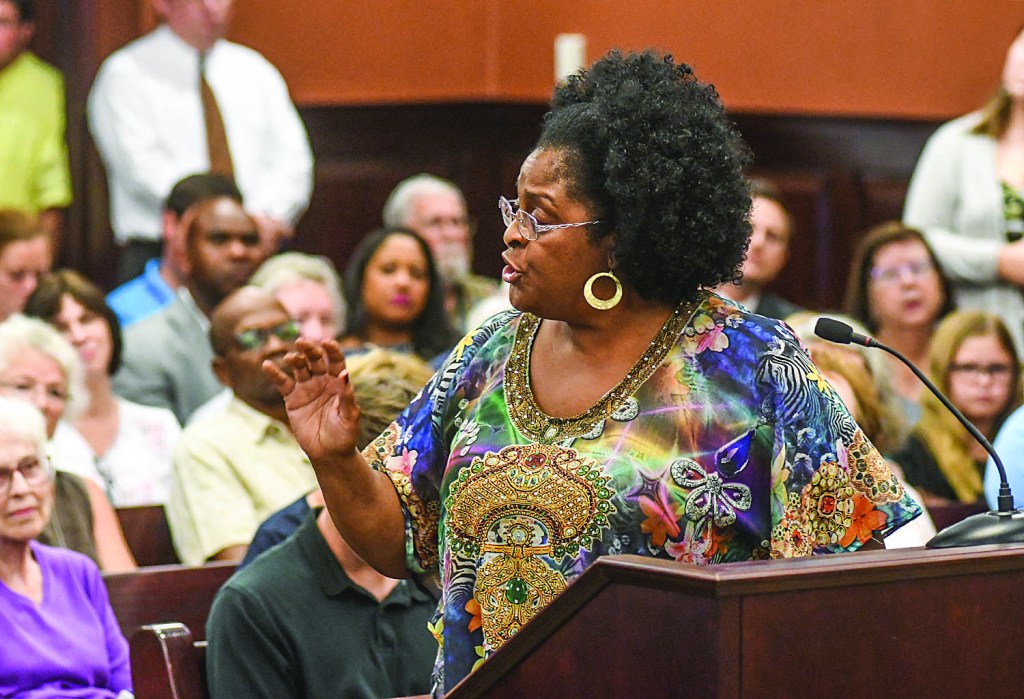 Effie Burt speaks about the Confederate statue on the Square at the meeting of the Lafayette County Board of Supervisors. on Tuesday. Burt asked the supervisors to move the statue from the Square. (Photo/Bruce Newman)

The Confederate monument was the central focus of a discussion held during the most recent Lafayette County Board of Supervisors meeting.

Residents who stand on both sides of the issue came forward to express their opinions about the monument that was erected in front of the county courthouse in 1907.

“This is a discussion,” Board President Jeff Busby made clear at the opening of the meeting. “No decision will be made on this subject tonight.”

Lafayette resident Kate Roos, who moved to the area from the northeast two years ago, took the podium to speak to the board first.

“Before you dismiss me as just a Yankee with a different point of view, let me remind you of a few important things: the vices of our ancestors have no geographical boundaries,” Roos said. “There is racism, dehumanization and hate that flourishes in the North as well as in the South.”

She recounted a story of how when she was younger, she asked a friend’s relative about the numbers tattooed on his arm. He was a Holocaust survivor.

“His response was what convinced me to come here this evening,” Roos said. “I will never forget it. He wept. He perhaps wept because his family was lost in the Holocaust. But I think he wept because of the silence of so many people for so long. That silence, you can hear it today. It’s still very real… This is our history, it’s not your history. You need to contextualize that monument and you need to move it off the courthouse lawn.”

Effie Burt, of Oxford, spoke next and opened with a series of questions.

Burt noted that many of the monuments were erected between the 1900s and 1930s, a time when groups like the Ku Klux Klan thrived.

“(They) ran my mama and her parents out of Lafayette County because my daddy refused to obey an order from a white man,” she said. “They had to run at night through woods in the dark till they got to Batesville. I didn’t get to grow up around my grandparents because they were too afraid to come to Mississippi.”

Burt added that there are museums in the country “that will tell the story about the battle that made us.”

“Let’s get together and come up with new symbols for our flag, something that will inspire all of us,” she said. “I think we should put Confederate monuments into a museum where they can be appreciated by those who feel they were not oppressed like how I feel I was with my family. I think we need a change and if we’re going to move forward, we can’t keep in the past. All you can do is look for the future.”

After Burt, Oxonian Danny Toma spoke in favor of the statue.

“That monument was put up for those boys from Lafayette County who died doing their duty as they saw fit,” he said. “They were defending their homes and many were not slave holders. They felt their homes were under invasion.”

Toma said that the monument is to honor those who couldn’t come back from the Confederate war effort.

“This was the only thing that people had,” he added. “We have to remember the devastating effect that that war had, not just on Lafayette County, but of the people in the region. Yes, many of the monuments were put up in the 1890s, 1900s and 1910s which coincide with the fiftieth anniversary of the war.”

Toma asked the board not to “act with haste.”

“I hadn’t heard anyone talk about the monument except for the past couple years,” Toma said. “We can wait to do anything if a decision has to be made to do anything at all.”

Lifelong Oxonian and Disabled American Veteran Jerry Bratton said that he “hates to see all this, because most people have never sacrificed themselves or their families to leave home and come back wounded.”

“It’s been there over 100 years,” he concluded about the statue. “You don’t know if it wasn’t made for a black man or a white man, because both black and white fought in this. I don’t see all the problem with it, but there is. We’re here in Oxford upset about a concrete statue that’s been there for more than 100 years. I just think we’ve got more to do with life than worry about something like this.”