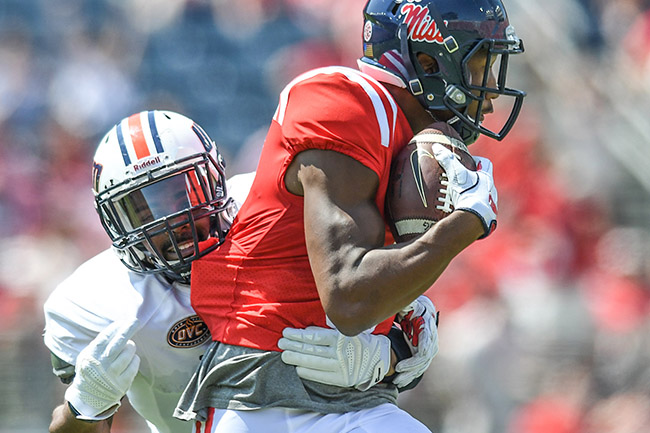 Ole Miss interim coach Matt Luke didn’t sugarcoat his team’s performance against FCS member UT Martin on Saturday, calling the Rebels’ play in their 45-23 win “sloppy,” for the most part.

A strong second half saved Ole Miss from disaster.

UT Martin, in its first game against an FBS opponent this season, led Ole Miss by as many as nine points in the first half before A.J. Brown’s 2-yard touchdown catch with 24 seconds left in the half gave the Rebels their first lead at 17-16.

By the time DaMarkus Lodge hauled in a 28-yard touchdown pass from Shea Patterson with 5:28 left in the third quarter, Ole Miss had scored on four straight possessions to give itself a three-score cushion. Jordan Wilkins also scored twice while DK Metcalf hauled in his first touchdown catch of the season for the Rebels, who’ve outscored their first two opponents 48-3 in the third quarter.

“Wasn’t very happy with our energy in the first half,” Luke said. “Third quarter was better. We put three touchdown drives together and played better on defense. But overall I thought we played a little bit sloppy today. Got to go back, got to look at it, and we’ve got to improve.”

Ole Miss scored the first 21 points of the second half to give itself some real breathing room and finished with 543 total yards after trailing 108-4 in that category at one point. Quarterback Shea Patterson and his receivers once again served as the catalysts with the sophomore throwing for a school-record 489 yards and a career-high five touchdowns, three of them coming after halftime.

“They’re learning how to play in tempo that is every down,” said offensive coordinator Phil Longo. “That kind of clicked today in the second half. Regardless of a positive play or negative play, we got into a rhythm running the system. We were a game better, and that’s what I wanted.”

The defense also did its part in thwarting the Skyhawks’ upset bid after a shaky start.

UT Martin knifed through Ole Miss’ defense for a seven-play, 75-yard touchdown drive on its first possession with both of the Skyhawks’ first-half scores coming on the ground. Stopping the run was a struggle early with UT Martin rushing for 144 yards in the first half.

An adjustment to the way the Skyhawks were blocking up front helped the Rebels hold UT Martin to 32 rushing yards in the third quarter and 43 in the fourth. UT Martin averaged 3.6 yards a carry in the final two quarters after going for 6.3 yards a pop in the first half and totaled just 127 yards after halftime.

“When they were running their inside zone, they weren’t double-teaming on our 3-technique (defensive tackle),” said linebacker DeMarquis Gates, who had a team-high nine tackles. “They were getting straight up to the linebackers, so we had to make some adjustments there.”

But for the second straight week, Gates and defensive coordinator Wesley McGriff both said some of those yards easily could’ve been prevented with better tackling.

“When you put on the tape, you probably see us misalign here or there or misfit there, but the most glaring thing is the fact that when we’re at the attack point is that we miss the tackle,” McGriff said. “It looks like we’re more reaching than knocking them back.”

With Ole Miss’ schedule stiffening considerably over the next month starting with a trip to Cal next Saturday, Luke said his team might not be as fortunate in the coming weeks unless it can put a full game together.

“The magic is not in the scheme,” Luke said. “The magic is in effort, and that’s what I’m preaching to these guys. There’s a way that I want this team to look, and we’ve got to go back to fundamentals and the little things right if we want to win those tough games on the road and win in SEC play. There’s some things we need to get shored up.”