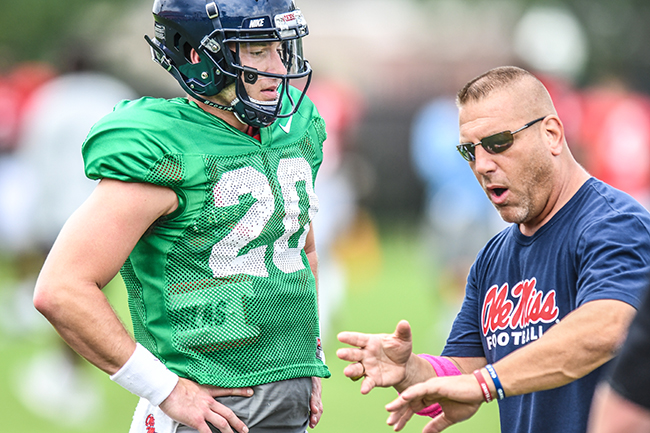 Phil Longo’s phone rang during his weekly press conference Monday, so Ole Miss’ offensive coordinator excused himself for a minute to see who it was.

“I feel I should almost answer it,” Longo said. “I think he’ll understand.”

It may be something Longo and the rest of the Rebels’ coaching staff will have to get used to this week with Luke in Covington, Kentucky, where he’s required to attend the school’s hearing with the Committee on Infractions as the acting head coach. The hearing began Monday and could continue through Wednesday, meaning Luke could miss practices Tuesday and Wednesday before the team flies to the West Coast on Thursday for Saturday’s game at Cal.

That would leave Longo and defensive coordinator Wesley McGriff in charge to run practice. McGriff said Luke met with both of them before leaving Sunday to go over the practice schedule.

“We have the whole week laid out,” McGriff said. “He just wanted to make sure that we’re organized and that we stay focused on what we do each and every day.”

McGriff said the coaching staff will communicate with Luke as much as possible while he’s gone, but Luke’s usual hands-off approach has both coordinators feeling comfortable about leading the bulk of the Rebels’ preparation.

Said Longo, “He’s so busy handling his head football coaching duties on Monday that he allows Wes and his staff and myself and my staff to go cover the game plan. (This week) really there’s no difference.”

Ole Miss has used explosive second halves to pull away from their first two opponents. With the schedule beefing up over the next month, the Rebels know they need to get started earlier offensively.

Ole Miss combined to reach the end zone three times in the first half against South Alabama and UT Martin before outscoring them 48-3 in the third quarter. Moving the ball hasn’t been a problem with the Rebels racking up a combined 1,074 yards of offense in those games, but Ole Miss has had to settle for field goals on four of its 11 red-zone trips.

Cashing in early will be paramount, Longo said, with trips to Cal, Alabama and Auburn looming.

“(Yards) doesn’t mean anything if you don’t finish the drive,” Longo said. “That was the emphasis at halftime in both games, and that’ll be the focus this week with the away trip and all of that. The focus is going to be on starting fast without question.”

Sophomore tight end Octavious Cooley made his season debut against UT Martin after being suspended for the opener.

Cooley, who was also suspended during part of training camp for an unspecified violation of team rules, had one catch for 4 yards, but it was other parts of his game that impressed Longo. Ty Quick and Gabe Angel are listed ahead of Cooley on the updated depth chart with first-team tight end Dawson Knox still hobbled with a foot injury, but the 6-foot-3, 257-pounder has the kind of physical traits that Longo expects to utilize more often.

“He made some heads-up plays,” Longo said. “He’s very physical. For as big as he is, he’s athletic. You’re probably going to see his role in the offense grow as the season goes on.”

Knox, who’s missed the first two games, will practice this week. His status for Saturday’s game will be determined later in the week, McGriff said.

Defensive end Qaadir Sheppard played approximately a dozen snaps against UT Martin as the sophomore slowly works his way back from an ankle injury. McGriff said Sheppard was “really productive” when he was in and will see more playing time against Cal.

Freshman cornerback D.D. Bowie sat out against UT Martin after having surgery on a ruptured thumb ligament but is expected to play against Cal.

Wanting to ‘make sure we’ve got the right guys…