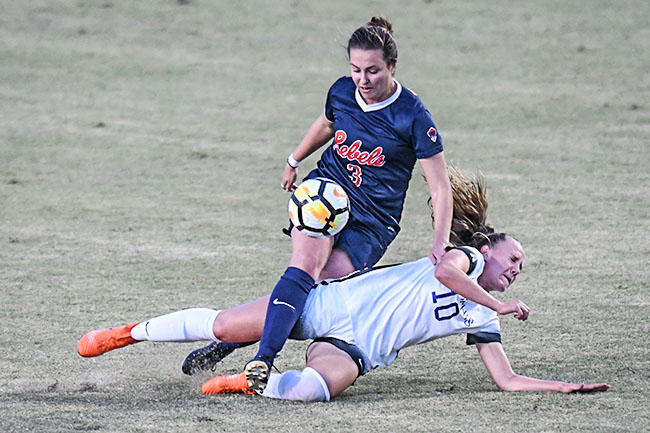 Ole Miss soccer remained undefeated on the season with another shutout victory over Memphis at the Mike Rose Soccer Complex in Memphis, Tenn. on Sunday night.

As was the theme in last year’s meeting, both sides swapped fouls all game in a back-and-forth contest, but the Rebel defense prevailed yet again, and freshman Channing Foster again found her offensive stride with a first-half goal to keep the unbeaten season alive.

Foster, who took seven of the Rebels’ 11 shots, made the most of her attempt in the 44th minute that would be only tally on the scoreboard. With the clock winding down nearing halftime, CeCe Kizer played to her from midfield on a give-and-go, and Foster did the rest with an impressive, left-footed strike that would sail roughly 35 yards into the back right corner.

After the Rebels took the 1-0 lead to the intermission, they didn’t let the aggressiveness go away, as multiple attempts in the second period were just a tad off. Mary Kate Smith had a strike just in front of Memphis keeper Shepard Ashworth, but is was stopped short of the net. Foster followed that with a shot from 15 yards out a few minutes later, but it was also kept away.

The freshman came back eight minutes later with a dangerous strike from 20 yards out off a cross from Smith, but it floated just high. Goalkeeper Marnie Merritt made one of the better stops of the year as she leaped up for a one-handed stop off a Memphis striker that got clear on the near side near the end of the match.

Merritt finished with two saves on the night, and the Rebel defense overall allowed only six Memphis shots. The Rebels once again held the advantage in corner kicks with five to the Tigers’ two, while the two sides combined for 29 fouls. Memphis had 15 fouls and Ole Miss 14. On the offensive side for the Rebels, Kizer had three attempts with one on frame, while Mary Kate Smith posted one shot on target.

Ole Miss’ Eli Johnson out for season with torn…