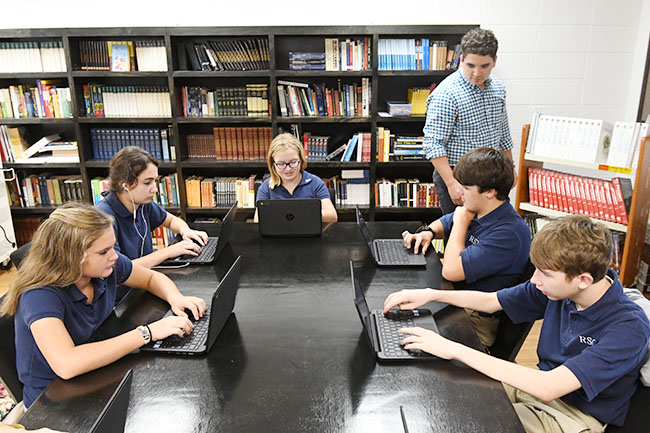 When Jason Wood came in as the new head at Regents School of Oxford, things began to change.

The “Gospel centered, classically driven” private school has been around for 17 years and Wood says that the establishment was “due for a renovation.”

Wood arrived at Regents on June 1 and immediately started a fundraising campaign to renovate the school’s gym. After raising $70,000, the facility was re-roofed, re-painted and a new volleyball net was installed. The latter allowed the school to add a new athletic program to their offerings. They also added a new running club to their existing basketball, archery, lacrosse and cheerleading teams. Soon, Regents hopes to add baseball to that roster.

“Last Thursday, we had our first home volleyball game for our high school,” Wood said. “It was bigger than just being a game. It felt like the school had taken a step up in being a more mature school. I’m looking forward to more experiences like that.”

The gym is an important building for the students at Regents as it is where they also eat lunch, participate in their drama program and hold chapel services.

Regents is three schools in one: early education (pre-K and Kindergarten), a lower school (first through fifth grades) and an upper school (sixth through 12th). Students are taught through the classical model which marketing director Jill Bell says is “developmentally appropriate.”

“A young child is a memorizer,” she said. “This is called our grammar phase, where they get lots of facts, dates and people. Middle schoolers like to argue and think. This is the logic phase. They start working through all these facts and learning to debate them respectfully. When you get to the upper school, it’s time to speak and figure out what you believe about it. That’s our rhetoric phase.”

Renovations are ongoing and recent upgrades also include a new computer lab expanding the communications capabilities for students. A new 3K program for youngsters is in the works for next year.

With an overall current enrollment at 203 students (from pre-K to 12), the school’s facilities aren’t the only things that have expanded in recent years.

Jake Todd, the upper school principal, has seen the upper classes total rise from 19 students three years ago to 53 this year.

“There’s just a lot of growth, so seeing all these renovations happen has been fun,” Todd added. “It’s like any organization: to see it grow is good.”

Bell says that Wood’s arrival has only had an overwhelmingly positive effect on the school.

“He is excited about new programs and new facilities for all our kids — both in the classroom and out,” she said. “Children walk in here and are known by name. You are loved. We really shine in being loving and having a well-rounded experience.”

Since coming to Oxford this past year, Wood and his family have “loved” the smaller community feel.

“For me, this is like coming back home because I grew up in Tuscaloosa, Alabama,” he said. “Here at the school, this has been a great experience—getting to know everybody that’s here. This is a sweet community of people here on College Hill, and specifically at Regents.”

Oxford Night of Genius event open to all entrepreneurs