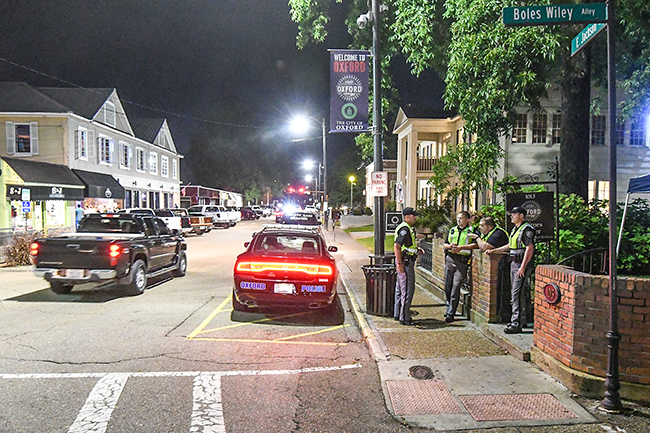 The Oxford Police Department will be working with bar and event venues to come up with ways to reduce dumping large amounts of people at one time onto East Jackson Avenue. (Photo/Bruce Newman)

For those who might feel uncomfortable or unsafe on the Square at night, the Oxford Police Department is unveiling a new program that could ease those anxieties.

The Safe Site is a tent that will be set up in front of Visit Oxford on Wednesday through Saturday nights from 8 p.m. until 45 minutes after the bars close. Uniformed officers will be stationed there for anyone who needs assistance, helps to find a ride home or for an escort to their vehicle.

As of this past Wednesday evening, the Safe Site has now been integrated into the Square.

Megan Prescott, the Executive Assistant for the OPD, says that the concept for the Safe Site began last February when Major Jeff McCutchen came to Chief Joey East with a proposal about “dedicating a number of officers to the downtown area.”

The proposal to begin the Safe Site project was presented in February, following the Fall 2016 semester where the OPD had an increased presence on the Square at night.

“Part of that proposal included designating an area where the public could come get assistance from officers,” Prescott added in an email. “The Downtown Unit was enacted in May of this year and has really worked to help with call response and efficiency of patrolling in that area. We decided to wait and introduce the Safe Site once students were in school.”

Prescott clarified that the Safe Site is not operating as a detaining area.

“It is intended to positively support the downtown community by having officers readily available in a designated, stationary and well-lit area,” she said.

Though the program began on Sept. 13, it has no connection to the kidnapping and sexual assault of an Ole Miss student on the Square on Sept. 10, McCutchen told The Clarion Ledger.

Students also need not worry about being arrested for underage drinking, McCutchen said.

“We want people to know that we don’t care if you’re drunk or under age. We’re here for you. We’re not trying to do anything but get you home safely,” McCutchen told the Ledger.

OPC pavilions can now be reserved for parties