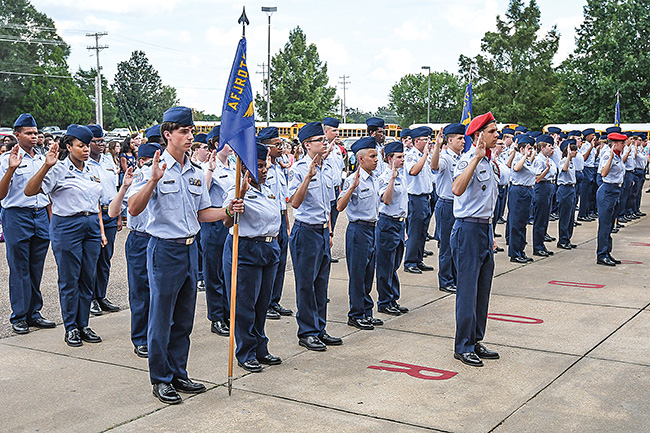 The Air Force Junior ROTC (Reserve Officers Training Corps) has been a part of the Lafayette High School community for 25 years, and during a ceremony on Thursday many new cadets joined in on that tradition.

The annual flag folding ceremony was held in front of LHS and during it, each cadet recited the oath. For freshmen, this swearing-in made them official members.

“I have chosen to be a cadet in the United States Air Force Junior ROTC program,” said each ROTC student in unison. “In doing so, I pledge allegiance to the United States of America and to the Air Force core values of integrity first, service before self and excellence in all we do. I will strive to be a productive citizen and uphold the Junior Air Force ROTC creed and our way of life.”

The mission of the Junior ROTC is to “develop citizens of character dedicated to serving their nation and community.” Those who join the group are under no obligation to join the military.

There are currently 96 cadets in the LHS program.

ROTC member and LHS student Destiny Mooneyhan spoke during the flag folding and described what each symbolic fold meant. Some of the folds signify respect toward mothers and fathers while others stand for religious values.

Major Harvey Rice has been with the program for 17 years at Lafayette and serves as the group’s senior aerospace science instructor. He likened the flag folding ceremony as their way to “kick off the beginning of the season.”

“They’re not actually members of the ROTC cadet core until they take the cadet oath,” he said. “Everybody takes it every year.”

Rice says that joining ROTC tends to run in families who have been a part of it before.

“We have three here now whose aunt and uncle I’ve had in the past,” he said. “It’s a strong tradition in families. Everybody needs a place to contribute and belong. Everybody can’t play on the football team, not everyone is in the band. This is a place to belong.”