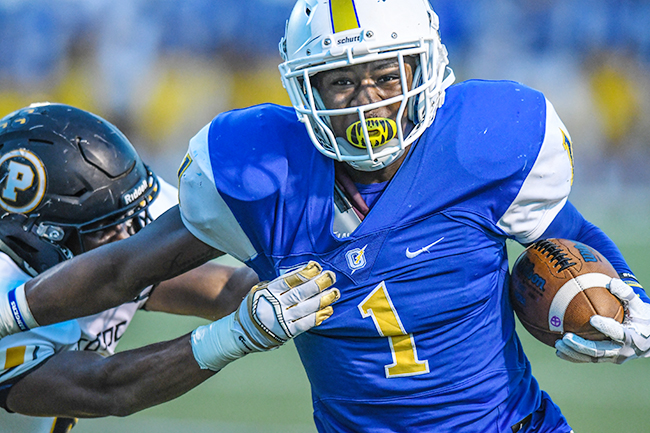 Two early touchdowns and a late field goal were enough for the Chargers to come away with a 17-0 victory.

It was Oxford’s third straight win and Pontotoc suffered their first loss of the season.

On the Chargers (4-1) first drive, running back Hiram Wadlington scampered in from five yards out to give Oxford the early 7-0 lead.

While defense and dropped passes were the theme of the game, Oxford had a very productive first quarter.

The Chargers would score for the second time on three possessions. This time, quarterback John Reese McClure found Dede Pegues for a nine-yard touchdown.

Oxford managed to hold Pontotoc (4-1) scoreless throughout the game — much in part to key dropped passes in the endzone and overthrown receivers. The defense also held the Warrior offense to under 50 yards in the first half.

“I felt we did some really good things early, but as the game wore on we got a bit sloppy,” Oxford head coach Chris Cutcliffe said. “We got sloppy in our execution after the first quarter and that’s uncharacteristic of us. It’s something we have to get better at before we start district play.”

With only a few minutes left in the third quarter, the Chargers marched downfield and Jack Tannehill hit a 22-yard field goal to put Oxford up 17.

McClure was 13 of 17 for 126 yards and a touchdown. Sophomore wide receiver Sam Bianco caught five passes for 83 yards.

Wadlington only had two carries for 29 yards and a touchdown and had two catches for 10 yards.

The Chargers managed to keep the Warriors under 100 total yards and coach Cutcliffe believes this win was exactly what his team needed heading into district the first district game of the season.

“It really counts starting this week. Having a great week in preparation to district play is what it’s all about.”, Cutcliffe said.

Oxford hosts Southaven on Friday to open up Region 1-6A play.