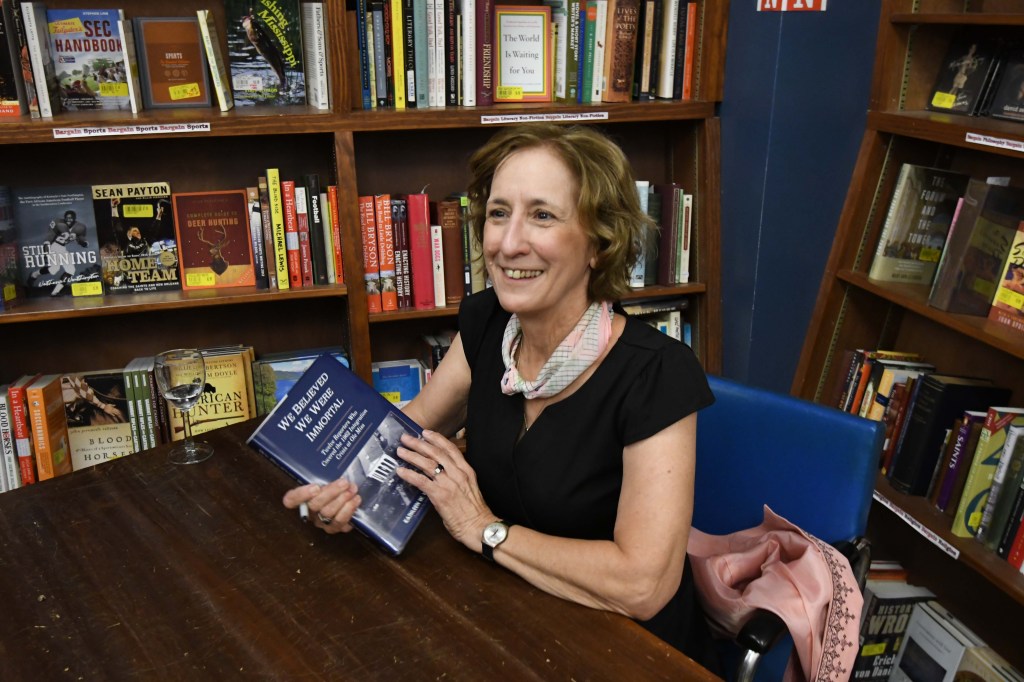 Kathleen Wickham, the author of "We Believed We Were Immortal: Twelve Reporters Who Covered the 1962 Integration Crisis at Ole Miss", signs copies of her book at Off Square Books on Tuesday. (Photo/Bruce Newman)

Kathleen Wickham’s new book is deeply personal, and it’s not even about herself.

Wickham, a journalism professor at Ole Miss, recently published “We Believed We Were Immortal: Twelve Reporters Who Covered the 1962 Integration at Ole Miss,” her fourth book which chronicles 12 men and women who came to the campus to report on James Meredith entering the university.

Journalism has always fascinated Wickham, who recalls reading newspapers and talking politics with her family at the dinner table. Wickham was raised in Phillipsburg, New Jersey and got her undergraduate degree at Rowan University where she spent four years working at the school’s paper while also majoring in journalism.

Wickham cites being in college during the Vietnam Era as having a major influence on her.

“There were the protestors, The New York Times quoting government officials, and there were my professors and I wanted to know the truth,” Wickham said. “The only way to do that was to pursue journalism.”

After graduation, Wickham was a newspaper reporter for 10 years with her longest stint being at The Star-Ledger in Newark, New Jersey. She then moved to Atlantic City just as the casinos were starting construction which gave her prime material for articles.

“I wrote some mob stories and I did investigative stories that sent some crooked politicians to jail,” she remembered. “I didn’t even think twice. I was young and full of enthusiasm and I was just walking into the fire, so to speak. I had a job to do which was to report these stories.”

When her former husband took a job in Memphis, Wickham relocated with him and has now been in the South for 36 years. She earned her M.A. and Ed.D from the University of Memphis, a city in which she spent 25 years.

The idea for “We Believed We Were Immortal” came to Wickham during the 40th-anniversary ceremonies of Meredith’s integration. While reading books and news stories about the topic, one detail stuck out prominently to her: the murder of French journalist Paul Guihard, the only journalist to die during the Civil Rights era.

“I was outraged to discover that Paul Guihard’s story was pretty much limited to a paragraph, maybe just a sentence,” she remembered. “There were no protests here in Mississippi 55 years ago (surrounding his death). So that began my quest to find out about more about Guihard.”

Guihard was sent to Ole Miss on assignment from the Paris publication Agence France-Press to investigate the scene on campus during the integration. He was only on campus for a window of 10 minutes before he was shot under what is now the Student Union building.

Wickham has also been instrumental in getting the Ole Miss campus recognized as a National Historic Site in journalism for the events that took place here surrounding Meredith. As the Chapter Advisor for the Society of Professional Journalists, she helped install a bench near the Meek School of Journalism and New Media that commemorates Guihard’s efforts and untimely death.

While doing research for her book (which took five years), Wickham was able to make contact with Guihard’s brother, Alain, in France and had the chance to speak with him.

Wickham’s book features far more than Guihard’s murder. Important news personalities like Dan Rather, who had his first national CBS broadcast live from the campus, and Dorothy Gilliam, the first African-American woman hired by the Washington Post, have their own chapters, too. Sidna Brower Mitchell, the student editor of the Daily Mississippian in 1962 who was nominate for a Pulitzer Prize, is featured as well.

However, Wickham is surprised at the lack of emphasis from the press in the past regarding Guihard’s death.

“What I’m finding out is most people don’t know someone died,” Wickham said. “He was the only reporter killed during the Civil Rights era. People vaguely know, but when I tell them the murderer has never been identified, they’re just horrified. If he’s still alive, we’re hoping that he’ll come forward. We can still hope that the truth will come out at some point.”

“We Believed We Were Immortal: Twelve Reporters Who Covered the 1962 Integration Crisis at Ole Miss” is now available for purchase at Square Books or through publisher Yoknapatawpha Press’ website at yoknapatawphapress.com.