Update: UPD Chief Tim Potts told the EAGLE there is no evidence to suggest the wreck that damaged the Confederate statue on the Ole Miss campus Saturday night was intentional. He said the driver is still in the hospital and will be charged with DUI when he is released.

“He is not a student,” Potts said Sunday.

Potts said UPD will release the name of the driver once charges have been filed.

UPD confirmed via Twitter that officers were on the scene, where a truck had left the road along University Circle and struck the Confederate statue. UPD also confirmed that the driver and at least one passenger had been taken to Baptist Memorial Hospital-North Mississippi for observation. The driver is suspected to have been intoxicated at the time of the accident, UPD said.

The Confederate statue has sustained damage, though the extent of it is not known at this time.

The names of the driver and passenger(s) have not been released. 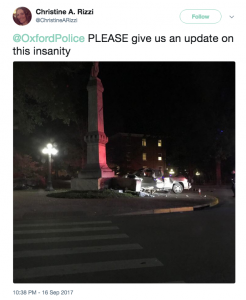 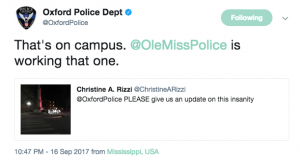 Ole Miss falls at Cal for first loss of…