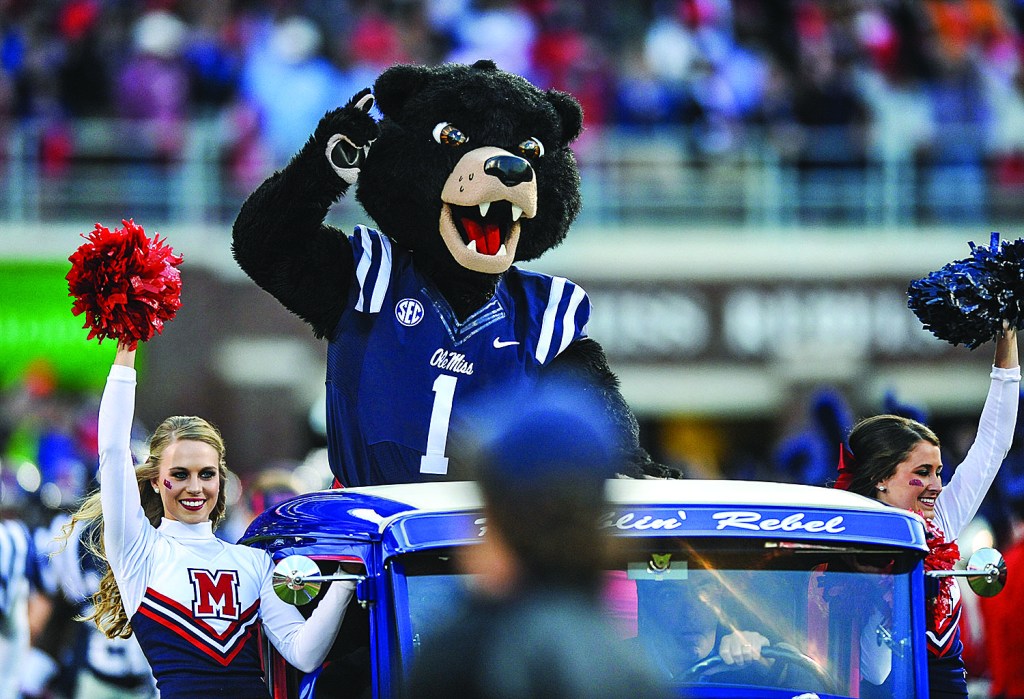 Rebel the Bear mascot at Ole Miss vs. Tennessee at Vaught-Hemingway Stadium in Oxford, Miss. on Saturday, October 18, 2014.

On Monday, the Associated Student Body posted a letter on its Twitter account stating that students will have an opportunity to vote to change the university’s mascot from Rebel Black Bear to a landshark on Sept. 26.

“The landshark as we know it today has its origins in football but has since expanded to symbolize Ole Miss’s fighting spirit and athletic prowess…After a decade of success under the landshark, it’s time to make it a lasting part of our history,” ASB President Dion Kevin III stated in the letter.

The vote, which is open only to current students at Ole Miss, will be held in conjunction with Homecoming Court and Fall Personality elections.

“The reaction from students has been overwhelmingly supportive of a chance to vote…We’ve gotten support from the Black Student Union and the Ole Miss chapter of Student Veterans of America, and we’re hoping to hear from more student organizations over the course of the next week,” Kevin said in an email to the EAGLE.

The referendum is the first step in the process of changing the mascot, Kevin said.

“This is a poll of student opinion on the landshark which may be used to craft an official statement on behalf of the student body which reflects their votes, which will subsequently be presented to university leadership,” Kevin said.

If the vote passes, ASB hopes to give an official statement to the university by the Vanderbilt game on Oct. 14 with a goal of having the new mascot in place for the 2018 football season, Kevin said.

The vote, however, is an advisory vote which is not binding to the university, regardless of the outcome of the vote, Ole Miss spokesman Ryan Whittington told the Associated Press.

On Monday, Ole Miss released a statement about the upcoming referendum, saying: “This referendum is a student-led initiative being conducted through an Associated Student Body (ASB) process. While we will not speculate on the outcome of their process, we value the important role that students play as an active voice in the life of our campus community. We are always interested in the viewpoints of our students.”

If the vote passes, Ole Miss Athletics will take over the development of the landshark mascot, ASB said in a comment on their Facebook page though further steps will have to be taken from Ole Miss Administration and Ole Miss Athletics before an official change of mascot can take place.

Unlike the 2010 vote that saw the black bear elected as the on-field mascot for Ole Miss, the upcoming vote will contain only two options: to keep the Black Bear or to change the mascot to a landshark.

There will be no write-in option for additional candidates.

The vote marks one of the first initiatives that ASB has brought forward for the 2017-2018 school year, which is “coincidental”, Kevin said.

“The decision to initiate a referendum concerning the mascot came from an observation by myself and other students that the landshark had become increasingly prevalent as a symbol of school spirit over the last eight to nine years. In order to ensure that we could include the referendum on the Fall Elections Homecoming ballot, I decided that in order to begin a student-led conversation we ought to bring the landshark to a vote,” Kevin said.

If the vote does not pass, there is no plan to continue the discussion about changing the mascot, Kevin said.