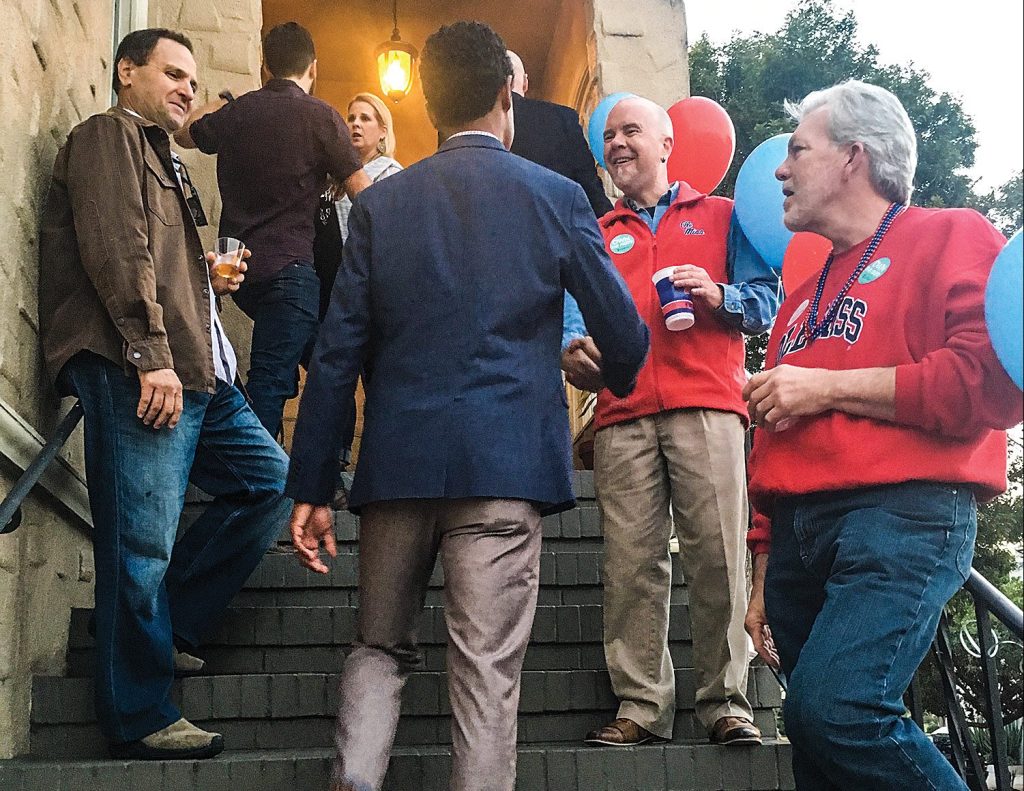 BERKELEY, California — It’s the Friday night before Ole Miss’ football game at Cal, and the San Francisco Ole Miss Alumni Club is hosting a welcome party at 3159 Baker Street. For three hours, members, as well as some school administrators—including athletic director Ross Bjork—shuffle in and out of a house just 16 miles from where the Rebels will play the following day.

It’s a surreal moment for the Bay Area alumni that normally have to cover thousands in a plane if they want to watch Ole Miss in person.

Alumni from Mississippi, Texas, Virginia and North Carolina, among other states, also swing by the house, which is shared by Clara Agnes Ault and five other Ole Miss graduates. San Francisco’s club has 178 members of its own, though not all of them can make it to the party. Richardson, a Winona native who retired to San Francisco two years ago after 28 years in banking, calls it more of a “Bay Area” club because members are scattered throughout different parts of the region, making it difficult for everybody to meet up at the same time.

Get-togethers aren’t unusual for a club with similar interests involving its alma mater. During the fall, it’s football.

Richardson says about 50 members attend a typical game day watch party, though more anticipated games — Alabama, LSU and the Egg Bowl to name a few — can draw in excess of 100. Local bars are the usual spots with The Valley Tavern being the most popular. Nestled in the heart of the Noe Valley in downtown San Francisco, the Tavern is equipped with a three-level outdoor beer garden and 17 high-definition, flat-screen televisions that are all usually turned to whatever channel Ole Miss’ game is on that day.

“We know we can walk into The Valley Tavern on a Saturday and we’re going to yell Hotty Toddy, hug people and cheer with people,” says Jennifer Rose Reid, class of 2010. “We may see those people later on in personal settings and we may not, but we’re still going to have that connection.”

It’s something most of the alumni living in the Bay Area wouldn’t have without their involvement with the club.

Reid, a Columbus native, and her husband, Colin, have only been able to get back to Oxford a handful of times since Colin’s job as a data engineer for Uber relocated them to San Francisco two years ago. The same goes for Ault, who graduated from Ole Miss in 2016 before moving to San Francisco after helping launch Curtsy, a fashion app that lets female college students rent formal wear from one another.

Long hours overseeing the business from home didn’t allow much time for social interaction for Ault and her roommates in their new city, but social media helped them get plugged in. Ault came across the club’s Facebook page and reached out to Richardson, which started friendships that otherwise likely would not have been formed.

“We immediately went to the first game (watch party), met a bunch of people from the Bay Area and had an awesome time, but I think it was just through us trying to find friends other ways,” Ault says. “That’s how we were going to meet people.”

Says Richardson, “You go out to eat and go out to drink and it’s a fortune to park your car, to eat and to drink. It’s hard to make friends here. This group, you make immediate friends.”

David Howard, a forensic psychologist who graduated from Ole Miss in 1984, has been in the Bay Area for more than two decades and still renews his season tickets every year in hopes of getting back for multiple games in a season. He thinks he’ll be able to pull it off this year with the Rebels starting a three-game homestand with Vanderbilt on Oct. 14, but it’s not always feasible living 2,500 miles away.

The connections within the club make that distance seem shorter.

“I’m sort of constantly looking and feeling like I’m not too far from home and the Ole Miss family, so they have a group of people here that you can expect to make it feel really precious,” says Howard, who lives in Piedmont, a 12-mile drive across the bay from San Francisco. “We have an extended family out here.”

But the club gets to play the rare role of host this particular weekend — nearly three years after the game was announced as the first of a home-and-home series with Cal, which will make the return trip to Oxford in 2019. The last time Ole Miss made it this far out West was a trip to Fresno State in 2011.

“We find out people are excited in the Bay Area about a game like this,” Bjork said. “I think it’s really cool. It just shows that the Ole Miss brand is strong and people want to come out and support.

“To kind of bring the program to them, I think means a lot to them. They’re very appreciative.”

Even with the Rebels’ West Coast trip coming in the midst of a tumultuous season, nothing is going to dampen the club’s mood. Ole Miss has already self-imposed a postseason ban in response to the NCAA’s investigation into rules violations, rendering the outcome of every game meaningless as it pertains to qualifying for a bowl.

“We could live here 10, 20 years and this is probably the only time the Rebels will play in our city,” says Colin, a Vicksburg native. “I’m trying to soak it in as much as I can.”

The welcome party and the tailgates eventually gave way to kickoff late Saturday night. Ole Miss leaves California Memorial Stadium with its first loss of the season, but for a group of supporters that’s waited for the Rebels to come this far, it’s a weekend that can’t be beaten.

“It’s a chance for us to show off why we love it out here and why we’re all so happy here, so it’s cool to think we get to show off our new adopted city and then we get to have a piece of home here, too,” Jennifer Rose says.