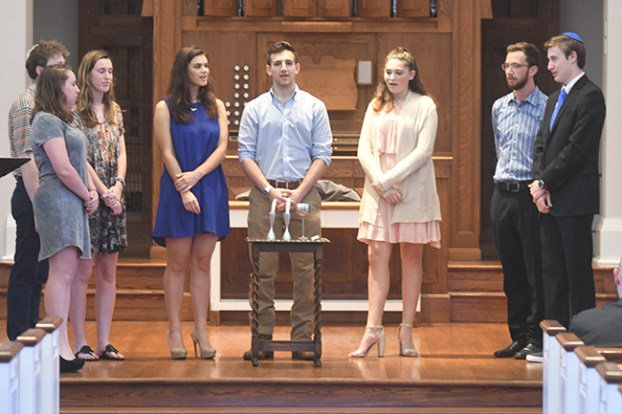 A group sings after candles are lit during a Rosh Hashanah service at Paris-Yates Chapel in Oxford, Miss. on Wednesday, September 20, 2017. Rosh Hashanah is commonly known as the Jewish New Year.

Rosh Hashanah, the Jewish New Year, is one of the most sacred holidays in the religion. And for the first time, services were held for the occasion in Paris-Yates Chapel on the University of Mississippi campus.

Maya Glasser, a fifth-year rabbinical student from New York City, was flown in to Oxford to help lead the services for the congregation. The Jewish Federation of Oxford in conjunction with Hillel, a Jewish student youth group on campus, put the evening together. Around 60 people attended on Wednesday evening and 40 the next morning for another service.

Glasser, an NYC native, says she was “excited to see there are different kinds of Jewish communities all over the country out of (her) metropolitan area.”

“It’s really special to come down here and meet people who know the same melodies, chant the same words and have the same childhood experiences as I do,” she added. “It builds a real sense of community in the world and connection across spaces where maybe there aren’t other connections.”

This was not Glasser’s first excursion down south as she has also led services for small Jewish communities in Arkansas.

“It was nice and surprising to hear that they wanted to do services down here,” Glasser said. “I try to go out of my comfort zone and meet people. The whole thing has been a pleasant surprise to come down here and meet people who are like me, just in a different state.”

Aside from prayer, Rosh Hashanah also features the blowing of a ram’s horn, or shofar, which symbolizes the ram that replaced Isaac as a sacrifice in the Jewish Torah (or holy books). Apples dipped in honey are also eaten to represent the hope for a sweet new year.

“The Jewish New Year is a time for growth, renewal and asking for blessings,” Glasser said. “It’s empowering to come together as a community and try to think about what’s good in our world and to make the world the best it can be in a time that feels so polarizing and so broken. To have Jews from different parts of the country and with different views and values to come together as Jews in a community celebration is really beautiful.”

Richard Gershon, the spokesperson for the Jewish Federation of Oxford, said that the group is pleased to finally be able to have services so close to home.

“While the Tupelo, Cleveland and Memphis communities have been welcoming to the Oxford Jewish Community, we are proud to be able to host High Holiday services in Oxford,” he said. “Rosh Hashanah is about new beginnings. This is a new beginning for Oxford and the University.”