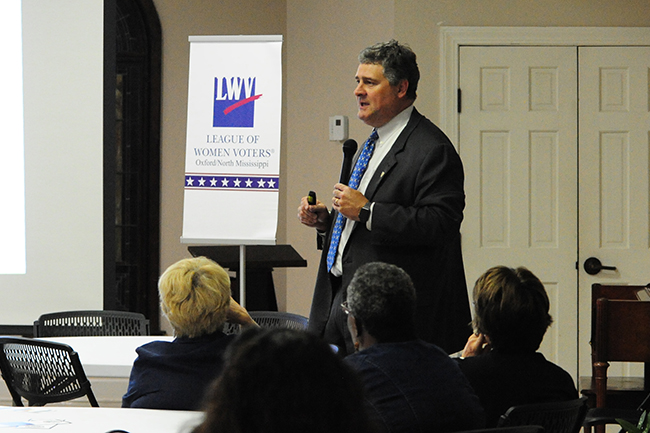 Oxford School District Superintendent Brian Harvey spoke with Oxonians at a forum sponsored by the League of Women Voters of Oxford and North Mississippi in preparation of a $38 million bond referendum for the district’s schools taking place next week on Sept. 26.

If passed, the bond will be used to construct a new elementary school and provide for other renovations to the district’s properties. The projected cost of the new school is $15,867,000.

The public forum was held on Thursday evening and gave citizens a chance to inquire about the bond. Historically, Oxford has always passed bond referendums with regard to the schools.

During his speech to the room, Harvey painted a portrait of the schools being overcrowded.

“Every classroom is full,” the superintendent said regarding Oxford High School’s current population. “We’ve got 1230 (students) at the high school and we’re going to continue to grow. Quite frankly, I think the high school is one of the reasons people move here.”

Not included in the bond is the plan for a new administration building for central office space.

“We’re going to pay for that over the next two years out of operating funds,” Harvey explained.

Throughout this process, Harvey stressed how he has been as transparent as possible.

“We don’t have anything to hide,” Harvey said. “There’s nothing that we’ve been talking about in secret.”

Dianne Fergusson, the president of the League of Women Voters, inquired about the fate of Oxford Elementary if the bond is passed.

“We don’t plan to use it as a school and it doesn’t make sense to use it as an administration,” Harvey responded. “We believe it will be annexed by the city and the value of that property will go up.”

“You have a population in the city that is culturally and economically challenged in a way that not all students are,” Kate Roos, who runs the non-profit Dignity Period in Oxford, said to Harvey.  “Their needs to have to be met, I’m concerned about that.”

“I think the course offerings that we already have through our partnership with the School of Applied Technology in Lafayette, and the ones we’re going to offer, will do that,” Harvey said. “We’ve had some drawings about a career academy wing. That’s something we’ve got to grow into. The state department here recently changed graduation options. We’ve got to deal with those career pathways from the ground up. It’s something we’ve got to build to.”

Skateboarder wants to show off Oxford Skate Park with…