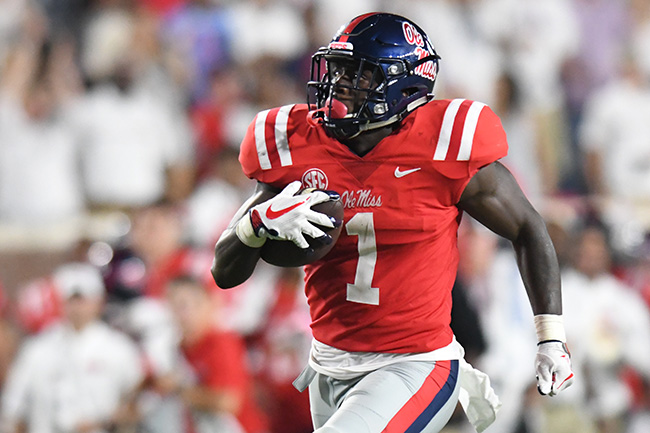 Ole Miss will go all the way until kickoff before determining if two of its starters will play against No. 1 Alabama on Saturday.

That’s the way interim coach Matt Luke described the statuses of receiver A.J. Brown and center Sean Rawlings during his weekly press conference Monday. Rawlings recently had surgery on his injured left ankle while Brown missed the second half against Cal with a strained knee.

Brown’s chances of suiting up against the Crimson Tide (4-0, 1-0 Southeastern Conference) are better than those of Rawlings, who is still in a walking boot and has yet to practice, Luke said. Brown, who leads the SEC and ranks fifth nationally with 129.7 receiving yards per game, will be limited in practice during the week with the hope that the Rebels’ leading receiver can give it a go against the nation’s top-ranked team.

Should Rawlings not to be able to go, Ole Miss (2-1) would go with guard Jordan Sims at center, leaving Javon Patterson at his more natural left guard spot. Alex Givens would fill in for Sims at right guard, Luke said.

As for other injured players, Luke said defensive end Victor Evans (knee) and kicker Gary Wunderlich (hamstring) will practice this week and are probable for the game, though both players will be monitored as the week progresses.