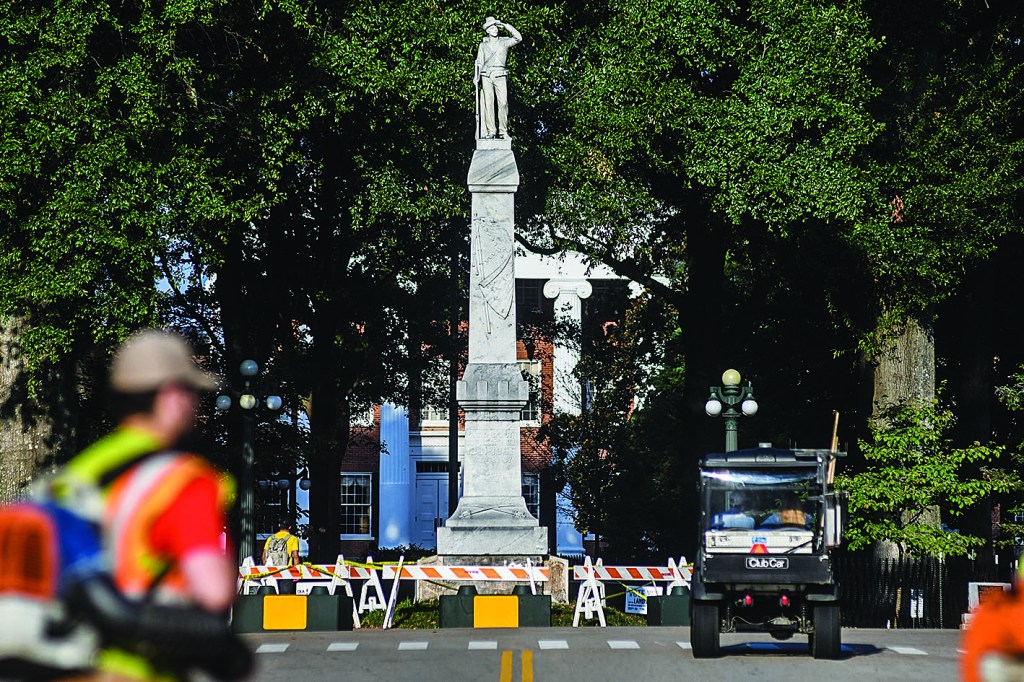 The Confederate statue at Ole Miss has stood in the Circle on campus for more than 100 years.

Over the course of 1906 and 1907, two structures were erected in Oxford that would forever impact the town’s landscape.

The Confederate monuments honoring those from Lafayette County who died fighting in the Civil War were constructed on the University of Mississippi campus (1906) and in front of the Lafayette County Courthouse (1907) and have remained a fixture of Oxford ever since. A single soldier is perched atop each, the one on campus facing east and the one on the Square facing south.

In recent years, they have drawn controversy and sparked debates over the motivation behind their construction and what they signified for the people who hoisted them up over a century ago. This series aims to examine both sides of the issue and to dive into the monuments’ pasts perhaps to determine what the future might hold.

The birth of the statue on campus dates back to 1892. The Women’s Memorial Society was formed that year with the intention to build a monument.

A 1904 document from the Mississippi Historical Society states that the 1892 meeting of the Confederate Memorial Association was “to solicit and raise money for a soldier’s monument.” One of the women involved with the project was Sarah McGehee Isom, for whom Ole Miss’ Center for Women and Gender Studies was named.

Two years after the Memorial Society was founded, The United Daughters of the Confederacy formed in Nashville, Tennessee in September 1894 with an Oxford chapter joining in 1900.

The Daughters were at odds with where the first statue should be placed. Many argued for it to be on the campus in honor of the University Greys regiment who were either killed or wounded during Pickett’s Charge in Gettysburg. Others fought for its placement on the Square.

Eventually, the members voted for the statue on the campus and on May 10, 1906, it went up. Mrs. N.D. Deupree, an Ole Miss professor’s wife with the United Daughters of the Confederates, wrote about the unveiling.

“May 10, 1906, was a red-letter day in the annals of Oxford, Mississippi, as on that day there was unveiled a monument to the memory of the Confederate dead in the cemeteries east and west of the city,” Deupree wrote. “Six hundred sleep under the shade of the trees a short distance west of the university. Most of their names are unknown.”

One panel of the Ole Miss statue reads, “To our Confederate dead 1861-1865,” while another side quotes the poem “Siege of Corinth” by Lord Byron. The third side reads, “To the heroes of Lafayette County who made glorious many a battlefield.”

However, this placement angered Sally Murray Falkner, William Faulkner’s grandmother, who split with the Daughters to campaign for another statue on county property. She teamed with the United Confederate Veterans and raised $3,000 for a new memorial.

“(Sally Murray Falkner) led the dissenting faction that wanted to memorialize all the county’s Confederates with a monument on the Square,” writes author Don H. Doyle in his book “Faulkner’s Country.” “When they lost, Sally Falkner resigned from the chapter and led a fund-raising campaign on behalf of the United Confederate Veterans, Camp 752, to erect the monument that stood in front of the courthouse. She also insisted that it face south instead of north, as was originally planned.”

On its front panel, the statue’s inscription reads, “In memory of the patriotism of the Confederate soldiers of Lafayette County, Mississippi. They gave their lives in a just and holy cause,” while the back panel reads, “the sons of veterans unite in this justification of their fathers’ faith.”

Though Confederate monuments have sometimes been the target of ire across the country, Mississippi currently has strict laws to prevent the removal of the structures, or make it difficult to do so. Any decision regarding the statue on the Square would have to be made by the county as it rests on county (and not Oxford) property.

Any structures or areas from the “War Between the States” may not be “relocated, removed, disturbed, altered, renamed or rededicated.” However, “(governing bodies) may move the memorial to a more suitable location if it is determined that the location is more appropriate to displaying the monument.”

Editor’s Note: This is part one of a three-part series about the history and the future of the Confederate statues in Lafayette County.