Confederate statues in Oxford, Mississippi—Monuments to the dead or to white supremacy? 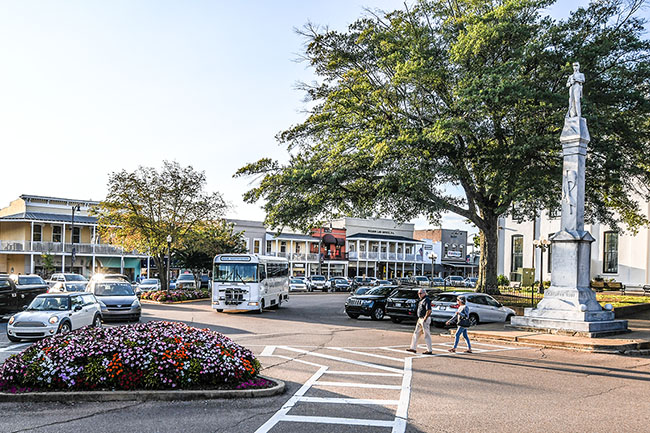 The Confederate statue, in Oxford, Miss. on Thursday, September 7, 2017, has been located outside the Lafayette County Courthouse for more than a century.

To some in Lafayette County, the war memorials on the University of Mississippi’s campus and on the Square are just that: monuments to those who died during the Civil War.

To others, they symbolize white supremacy given the era in which they were constructed and the cause they memorialize.

Local historian Starke Miller has been studying the Civil War for 27 years, particularly its effect on Oxford and the Lafayette community. During his studies, Miller says he has never heard nor read about the statues being a testament to white supremacy. He says the Confederate Daughters, who funded the statues, did not do so with racist intent.

“(The statue) is to the dead of Lafayette County, the valor of the Confederate soldier and it’s to the women of Lafayette County,” Miller said. “Those women did everything they could to raise money. There was nothing racist to that. They were remembering the young men who didn’t come home.”

Many of the Confederate memorials that went up across the country following the Civil War (an estimated 700 at current count) were built between the 1890s and 1950s. Which, according to the Southern Poverty Law Center, coincides with the Jim Crow era. The biggest spike was between 1900 and 1920, the period in which both of Oxford’s monuments were built.

Charles K. Ross, the Director of African-American Studies and Professor at the University of Mississippi, believes that this was no coincidence.

“I think that when they were erected in the early part of the 20th century, there was tremendous backlash that was taking place in America,” Ross said. “Segregation was becoming the law of the land and you had numerous lynchings. You had African-Americans losing the right to vote. They are the byproduct of the era in America.”

Though Ross thinks that the argument can be made “that they pay homage to the bravery of individuals that participated on the side of the Confederacy,” he finds fault with that theory.

Associate Professor of History John Neff, who is also the Director for the Center of Civil War Research, says that white supremacy might not have been on the minds of those who erected the monuments, it was “almost an unquestioned certainty that this (the monuments were) about celebrating a particular interpretation of the Southern past which appealed to Southern whites.”

Neff also noted the Mississippi Constitutional Convention of 1890 which was promoted by U.S. Senator James Z. George. Neff says that the Constitution introduced an understanding clause which disenfranchised 90 percent of the black vote which would not be reclaimed again until the Civil Rights Act of the 1960s.

“There was not thought that there ever would be an opportunity for African-American groups to dominate public space in similar ways, not with such permanency,” Neff said. “It became much more difficult after the 1890 Constitution.”

Miller says that during the 1860-1861 Ole Miss school year, 25 percent of the male student population who attended that fall, would die during the four years of the civil war.

“They had seen all that death and suffering here,” he said. “They put the statue in the most public place and on public property. It was a mass mourning. 10 percent of all military-age Southerners died in the war. In the historical record, from the pens of these ladies who did it, there is nothing mentioned about racism. On the monument on the (Lyceum) circle, it is strictly dedicated to the dead. If we lost 25 percent of these kids here in school today, I promise you monuments would go up. It would have nothing to do with racism, it’s just loss.”

The motivations of the United Daughters of the Confederacy have been called into question, too.

“The Daughters took on the idea of the need to promote the Confederacy, promote a true interpretation of the war from their perspective,” Neff said. “To do so by caring for the wounded, caring for the families, but also by aggressively monumenting. As to what they were monumenting, they considered it to be the glory of the Confederate effort.”

Neff agrees that both monuments are more than likely about “the loss of man.”

“We can say white supremacy, but I suspect very few women involved had that as a conscious thought and were doing this to promote their racial superiority over others,” he said. “Although it may have had that effect, more likely these are mortuary monuments to the dead of the county.”

Elizabeth Payne, also a professor of history at Ole Miss, is divided on her opinion of the Daughters.

“(They) did a number of good services in terms of aiding veterans, for example,” Payne said. “I do not think erecting such statues was one of the more positive things about that organization.”

Payne believes there may have been other reasons for their construction.

“I think there are other motivations,” Payne said. “Why did it occur in 1907? Why didn’t it occur in 1866? It’s later, it’s political, it’s after Mississippi adopted a new constitution which disenfranchised African-Americans. There’s a historical context in which these statues are erected.”

The official proclamation on the United Daughters of the Confederacy’s website states that the group, “does not associate with or include in its official UDC functions and events, any individual, group or organization known as unpatriotic, militant, racist or subversive.”

The United Daughters of the Confederacy did not reply to a request to comment for this story.

Editor’s Note: This is part two of a three-part series about the history and the future of the Confederate statues in Lafayette County.