Ole Miss next to seek balance against Alabama 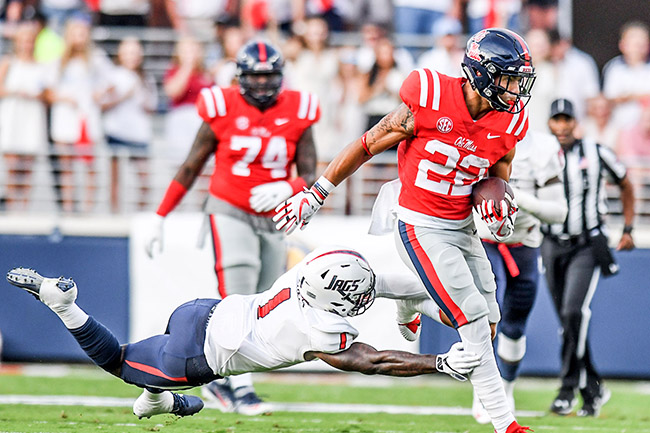 The question is the same for every offense that faces Alabama’s defense: How do you keep the Crimson Tide honest?

It’s Ole Miss’ turn to try to come up with an answer.

Despite losing seven players to this year’s NFL Draft, Alabama’s next wave of former four- and five-star recruits has its defense as stingy as usual under Nick Saban. Again it’s the Crimson Tide’s run defense leading the way with Alabama fifth nationally in rushing yards allowed per game (70.3), though it hasn’t been much easier for teams to move the ball through the air (177 passing yards per game) against the nation’s fourth-best scoring defense.

Ole Miss has averaged 36 points through its first three games on the strength of quarterback Shea Patterson and his plethora of receivers, who’ve directed the SEC’s top passing offense thus far. But the Rebels know they’ll have to come up with some semblance of balance to give themselves a chance against the nation’s top-ranked team Saturday when the teams meet at Bryant-Denny Stadium (8 p.m., ESPN).

“I think Alabama, just like any defense, you want to try to keep them honest,” offensive coordinator Phil Longo said. “They’re so athletic. Even if they step out of position, they’re so athletic they’re able to retrace and cover mistakes.”

Achieving that doesn’t necessarily mean an equal distribution of runs and passes but efficiency on as many snaps as possible, Longo said, something Ole Miss continues to struggle with on the ground. After finishing 12th in the SEC in rushing last season, the Rebels are next to last nationally in rushing through its first three games while averaging just 2.75 yards per carry.

Those numbers were the worst they’ve been all season the Rebels’ last time out against Cal when they mustered just 53 yards on the ground and 1.8 yards per carry. With an offensive line that may have to reshuffle if center Sean Rawlings (ankle) can’t go Saturday, interim coach Matt Luke said it will be vital for the offense to stay on schedule.

The Rebels could try to do that by opting to use short passes as an extension of the running game. Whether Ole Miss will have leading receiver A.J. Brown (strained knee) remains to be seen, but Luke believes the Rebels have enough weapons out wide to loosen up Alabama’s defense.

Ole Miss has used big plays in the passing game to help it average 36 points against the Crimson Tide in the teams’ last three meetings. Regardless of what’s called, the Rebels know they’ll have to win their share of individual matchups.