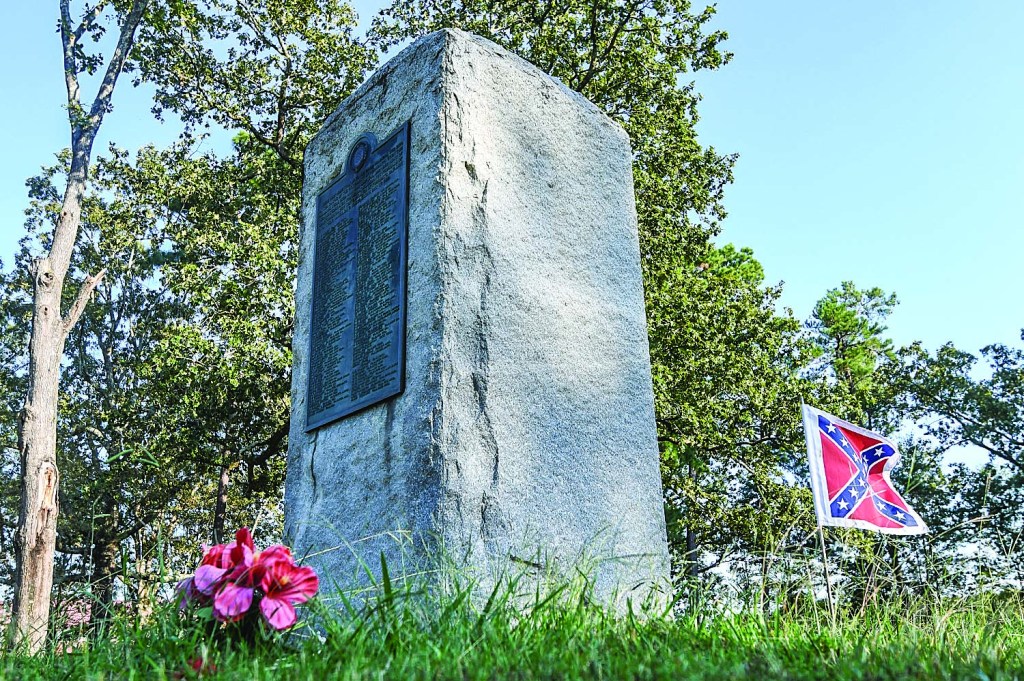 The marker for the Confederate cemetery at Ole Miss on Thursday. (Photo/Bruce Newman)

The two Confederate monuments have been in Oxford for over a century, but it’s possible they might not always stand where they were originally constructed.

While no decisive plans or actions have been made or taken by the local government or university, citizens of Lafayette County have begun discussing the context of these statues and their place in Oxford’s future.

Charles K. Ross, the Director of the African-American Studies Program and professor of history at Ole Miss, believes the statues should be moved to a more “historical place.”

“The monument on campus ideally needs to be moved to the Confederate cemetery (on the campus),” Ross said. “They both need to be located in a space that’s not public where people, particularly African- Americans, can walk by and see those structures.”

John Neff, the Director of the Center for Civil War Research and an associate professor, is “torn as a historian of history and memory” on what should be done regarding the monuments.

“I understand their existence and the processes which produced them in 1906 and 1907,” Neff said. “And yes, in a sense as historical artifacts, I would like to keep them. But I think they’ve become problematic in recent society.”

Like Ross, Neff would prefer to see the statue at Ole Miss be moved to the Confederate cemetery on campus.

“It’s in perfect context there,” he said. “The 1906 monument is to the dead of Lafayette County. The young men who believed in their cause and went off and served and gave the last full measure of devotion. That seems to me the best context in which the University can maintain the monument and to do so in a way that tells us something about this campus in the 1860s and then this campus in 1906.”

In 2016, Ole Miss’ chancellor, Jeffrey Vitter, created the Chancellor’s Advisory Committee on History and Context to contextualize sites on campus, including the Confederate monument.

Some believe that the same should be done for the statue on the Square in lieu of relocating the statue completely.

Ole Miss alumnus and Civil War enthusiast Steve Vassallo is against the removal of the statue, but says he has “no problem whatsoever” with the idea of contextualization.

“I’m very much opposed, from a historical standpoint, of removing any statue or monument,” Vassallo said. “Even those that I might disagree with. I think it’s totally the wrong thing to do. (With contextualization) I think the more factual information that can be conveyed is good. I’m certainly not opposed to contextualization at all. As long as it’s accurate information.”

Elizabeth Payne, a professor of history at the university, says that just putting a plaque next to either statue would not paint the whole picture.

She recalled her first time seeing the monument on campus when she arrived at Ole Miss.

“I was walking around campus and it occurred to me that the University should have another monument directly facing the doors of the Lyceum of James Meredith with the same height,” Payne said. “That would tell a more complete story about this university than even taking down the monument.”

Starke Miller, a longtime Civil War historian, believes that instead of taking down or moving monuments, the best course of action would be to “build up” around them and to use the statues as an educational opportunity.

“There are other worthy individuals and groups who ought to be noticed, black, white or anything else,” Miller said regarding monuments that could be built to honor other individuals. “We use these for children and adults to educate people. People may see that statue and go home and Google things. If you don’t like Confederate history, and I can understand that side of it, point at it to your children and tell them, ‘this was wrong and we should never do this again.’”