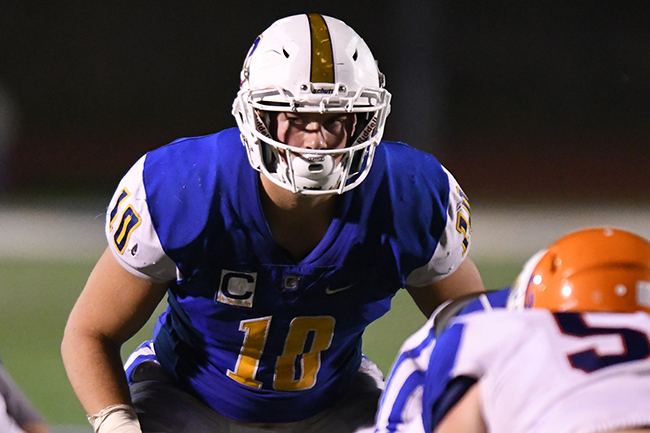 Oxford High’s Quentin Wilfawn lines up against Southaven at Bobby Holcomb Field in Oxford, Miss. on Friday, September 22, 2017. Southaven won 23-13 in Oxford's first ever district game in MHSAA Class 6A..

Wednesday brought the announcements of the high school football all-star rosters. Oxford and Lafayette were not left out as each school landed players on each.

The rosters were revealed at the Mississippi High School Activities Association office in Clinton.

The annual Mississippi-Alabama All-Star game will be held on Dec. 16 at M.M. Roberts Stadium on the campus of the University of Southern Mississippi in Hattiesburg.

Oxford will be represented as Jaquan Webb was selected to the Mississippi roster. Webb is returning from a leg injury that cost him a couple games but returned against Southaven on Sept. 22.

Webb has caught 15 passes for 138 yards and one touchdown, providing key offense for the Chargers.

The second all-star game each year is the Bernard Blackwell North/South All-Star game. It will be played on Dec. 9 at Milner Stadium on the campus of Gulfport High School in Gulfport.

Senior linebacker Quentin Wilfawn of Oxford and senior running back Jamarcus Quarles of Lafayette were selected on the North roster.

Wilfawn has been a defensive leader for the Chargers. He has recorded 102 tackles — 38 unassisted — through Oxford’s first seven games. 12 of those tackles have been for a loss. Wilfawn is second on the team in sacks with 4 1/2.

It was a slow start to season for the reigning EAGLE Player of the Year but Quarles has found his groove the past couple weeks. He ran for 171 yards and four touchdowns against Saltillo last Friday and has a total of five scores on the season.

Both Oxford and Lafayette play on Thursday for Homecoming due to fall break beginning on Friday. The Chargers host DeSoto Central while the Commodores host Lewisburg.