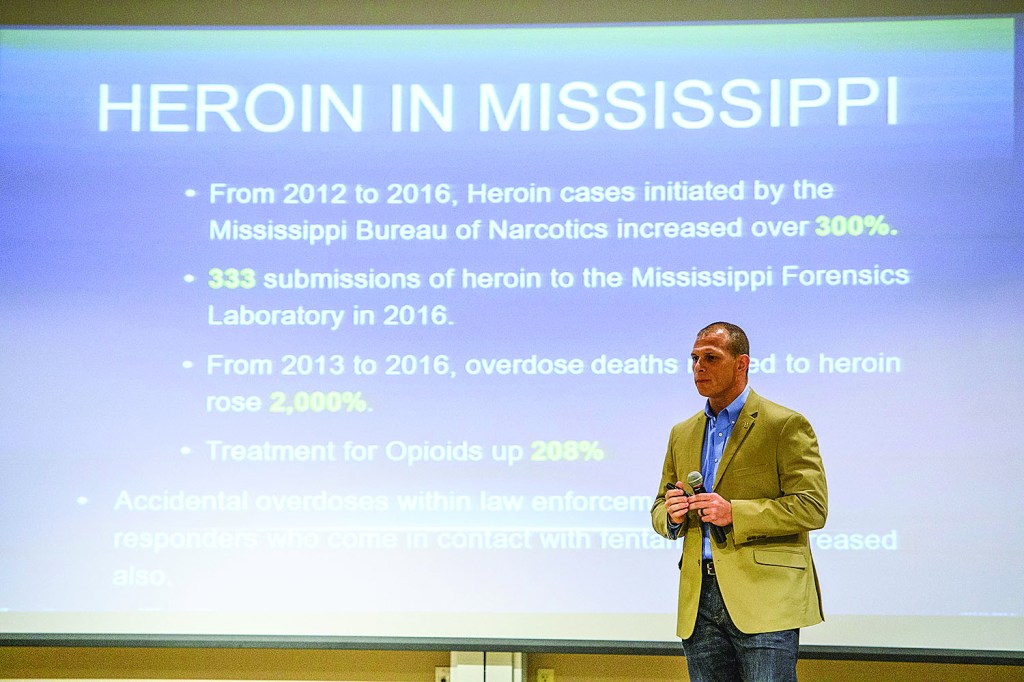 According to the Mississippi Bureau of Narcotics, over the past three years, deaths related to heroin have risen in Mississippi by 2,000 percent. Eighty percent of these cases started with prescription opioid use.

Last night, members of the State Department of Mental Health, the Bureau of Narcotics and other groups spoke at an Opioid Town Hall Meeting that took place at the Oxford Conference Center.

Lieutenant John Harless, of the MS Bureau of Narcotics, took the floor first to share some startling statistics about opioid use.

“We throw the word opioid around, and most of the time, we don’t define what it is,” Harless said. “Opioids are drugs that are designed to alleviate pain. They can be prescription drugs. Of late, it’s heroin. Something a few years ago, we didn’t think we saw in Mississippi.”

Harless said that in 2015, of the 52,424 deaths from accidental drug overdoses across the country, 33,091 were opioid-related—an average of 91 deaths per day.

Ann Rodio, with the Department of Mental Health, spoke about the $2.8 million State Targeted Response Opioid Grant to be used to combat opioid addiction.

One of the biggest features of the grant is to increase the usage of the medication Narcan, a nasal spray that contains naloxone—a molecule that can help those who have overdosed.

“It has no function other than to flush opioids off the brain,” Rodio said. “It cannot hurt the individual.”

A moving personal account came later from James Moore, whose son Jeff overdosed and passed away from opioids.

“Do not think it can’t happen to those you love,” Moore warned. “Jeff was never able to succeed because of his addiction…We must eradicate the stigma of the disease. My challenge to you is we must stop the dying. Not one more.”

Bracelets with the phrase “Not One More” were also given out at the front of the conference center, further highlighting a theme of the night.

“We have got to, as a people, come with an urgency as we confront this problem,” Dowdy said before turning his attention toward colleges throughout the state. “This stigma of not wanting to acknowledge that you have a problem on your campus has got to stop. We’ve got to have an urgency, because people are dying.”