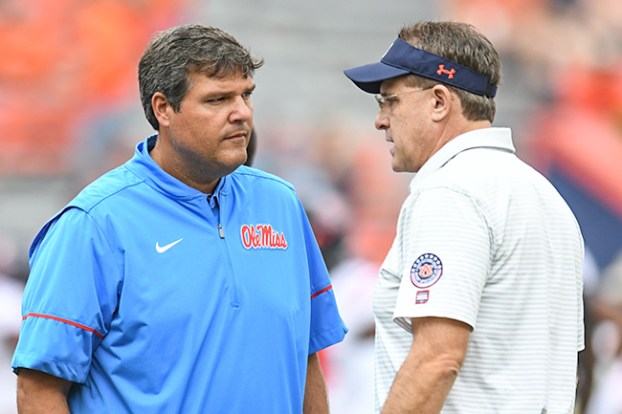 A long kickoff return sets Auburn up at Ole Miss’ 30 to begin its first drive of the second half. The Rebels force a 49-yard field goal by Daniel Carlson. Auburn 38, Ole Miss 3, 13:53 3Q

Auburn punts for the first time with 1:11 left in the second quarter.

Ole Miss moves into Auburn territory, but Patterson’s third-down pass intended for Van Jefferson is broken up by Roberts. The Rebels go for it on fourth down from Auburn’s 29, but Patterson connects with Jefferson for just three yards as Ole Miss turns the ball over on the downs.

Auburn finds the end zone for the fourth straight possession when Johnson goes untouched up the middle for a 48-yard touchdown. The Tigers have 270 yards of offense. Auburn 28, Ole Miss 3, 12:24 2Q

Ole Miss goes three-and-out for the second straight drive, and A.J. Moore is ejected for targeting after going high on Auburn punt returner Stephen Roberts. Ole Miss is without its nickel corner for the rest of the game.

Auburn goes 74 yards in 10 plays to pad its lead. Stidham finds Darius Slayton in the back of the end zone for a 19-yard touchdown, and Ole Miss finds itself in another big hole. Auburn 21, Ole Miss 3, 14:53 2Q

A.J. Brown already with five catches after not recording any last week against Alabama, but his latest one is two yards short of a first down. Ole Miss punts for the first time after the first three-and-out for either team.

Auburn needs just one play to increase its lead on Jarrett Stidham’s screen to receiver Ryan Davis, who outraces Ole Miss’ defense down the sideline and cuts across the field to find the end zone. Auburn 14, Ole Miss 3, 4:04 1Q

Ole Miss quickly reaches Auburn territory again and gets the help of a roughing-the-passer penalty against Shea Patterson, but Patterson’s third-down fade to DK Metcalf in the end zone falls incomplete. Wunderlich connects this time from 27 yards out to get the Rebels on the board. Auburn 7, Ole Miss 3, 4:19 1Q

After suffering one of its worst SEC losses ever last week to Alabama, Ole Miss tries to regroup against another powerful conference foe.

It’s Ole Miss at Auburn this morning in SEC football. The Tigers are 22.5 point favorites. Game time is 11 a.m. central. It will be televised on the SEC Network.

We will have Ole Miss vs. Auburn 2017 live score updates here throughout the game so check back for analysis and score updates.

The 12th-ranked Auburn Tigers are hoping their last two performances will carry over into Saturday’s game against the Rebels.

It’s no wonder the coaches and teams have a totally different perspective. Ole Miss (2-2, 0-1 Southeastern Conference) is stinging from a 66-3 loss to No. 1 Alabama and hoping the best medicine lies in the same border state.

The Tigers (4-1, 2-0) are fresh from a second-straight SEC blowout, 49-10 over Mississippi State . Now, they’re three-touchdown favorites in this one with one of the SEC’s best defenses and an offense that has been increasingly producing big plays.

This game pits quarterback Shea Patterson and the SEC’s top passing offense against an Auburn defense that is the only one in FBS to allow 14 or fewer points in every game.

Some other things to know about this game:

WATCH THE QBS: Patterson ranks fourth nationally in passing yards per game even after a subpar outing against Alabama, and has the league’s top two receivers in A.J. Brown and DaMarkus Lodge. Auburn’s Jarrett Stidham has only 12 incompletions in the last three games. In the last two, Stidham has had seven passes go for at least 46 yards.

AUBURN BACKFIELD: Auburn’s Johnson has run for eight touchdowns in the past two games, five against Missouri and three against Mississippi State. Those performances have helped the Tigers miss a healthy Kamryn Pettway (lower leg) much less. Pettway played some against the Bulldogs and lost a fumble. Malzahn said fellow tailback Kam Martin is also nursing an unspecified injury that kept him out of the last game.

“The fact that Chip is calling the plays and we are different in a lot of ways, it’s not like you would think,” Malzahn said. “But he’s definitely familiar.”

REBELS AGAINST TOP 15: Ole Miss beat both No. 8 Texas A&M and No. 11 Georgia last season. The Rebels have nine wins over teams ranked in the top 15 over the last four years.

EARLY KICK: With the game kicking off at 11 a.m. CT, the Rebels opted to fly to Alabama on Thursday. Ole Miss played an early game on Sept. 9 and beat Tennessee-Martin 45-23. “We’ve done it once before so I think that will help,” Luke said.

Staff and Wire Reports The Hurricane Nate path forecast has sharpened, and the Mississippi coast is expected to take a... read more