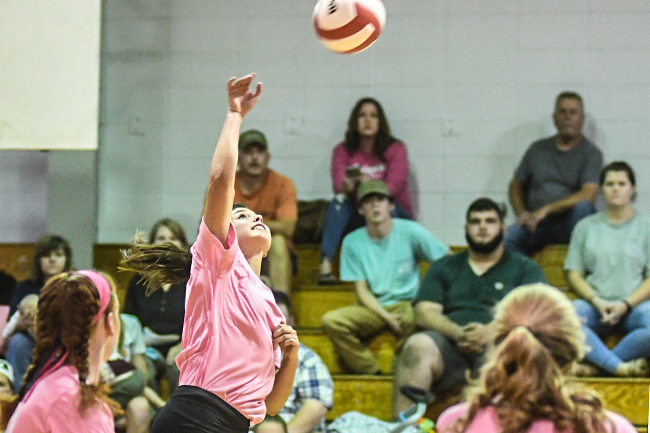 The match went the distance. If it had not, Lafayette head coach Clint Jordan would have been very surprised.

For the second time in two weeks the Commodores and Caledonia went five sets. The first time saw the Confederates win 3-2 in their home gym on Sept. 26.

“I anticipated playing five (sets),” Jordan said. “Both times we played them last year it went five. So, we’re accustomed to this. It’s just how it happens when we play Caledonia.”

The last time these two teams played they traded set wins with Caledonia coming out on top. It was a near carbon copy on Tuesday with the only change being Lafayette (9-9, 6-1 Region 4-Class III) coming out the victor.

It was a strong start for Lafayette, who took control of the opening set early and held on for the early 1-0 advantage. From there it was a see-saw affair with Caledonia (22-8, 6-1) taking sets two and four and the Commodores grabbing sets three and five.

In their set wins, Lafayette was strong at the serve and able to dictate the pace against the Confederates. In defeat, Lafayette looked lost and struggled with their serve, which kept them off balance.

“We served it better,” Jordan said. “Last time we went down (to Caledonia) we came out with six to eight serving errors every game. Even the two we won. Tonight we did much better. As long as we can put the ball in play and not give points up we give ourselves an opportunity.”

Playoff picture
Things are not quite finalized when it comes to the Class II playoffs. Lafayette has a chance to share the region title with Caledonia thanks to splitting their season series, but they must take care of business on Thursday.

Each team has a region match left with Lafayette hosting Amory for senior night (6:30 p.m.) while Caledonia hosts New Hope. If both teams win then they are co-champions of the region. If Lafayette falters then Caledonia will claim sole possession of the Region 4 title. The same is possible for Lafayette if New Hope trips up Caledonia.

If there is a tie atop the standings then tiebreakers will come into play to decide seeding for the No. 1 and No. 2 positions. Seeding is key as the No. 1 seed will start the playoffs at home with the No. 2 seed hitting the road in round one.

“The easy answer is we have to in Thursday for anything to matter,” Jordan said. “We put ourselves in at least a position to host. Now if we don’t it will be because we did a thing or two wrong during those sets. Or that Caledonia is just really good and I tend to think Caledonia is really good.”

The playoffs begin on Oct. 19.