Lafayette High School heads to Grenada for key 1-5A matchup 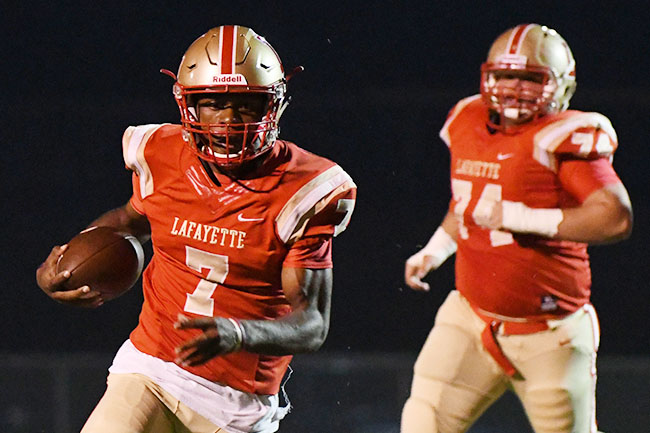 Lafayette’s Randy Anderson (7) and the rest of the Commodores will go for their third straight win Friday at Grenada. (Photo/Thomas Graning)

The reigning Class 4A state champions are feeling like their old selves.

After an 0-5 start to the year, Lafayette has rattled off two wins in a row and looking for more.

The Commodores will return to the road when they travel to Grenada in a pivotal Region 1-5A matchup on Friday (7 p.m., 105.1 FM).

A loss to No. 1 West Point to open up region play on Sept. 22 had Lafayette reeling and looking for answers. They found them with dominant wins over Saltillo and Lewisburg, outscoring them 79-28.

“We’ve gone back to some things. We’ve just gotten better,” Lafayette head coach Michael Fair said. “It’s the resounding theme around this bunch. We just continue to get better each week. It’s not like what we’re doing now is different than what we were doing a month ago. We’re just doing it better than we were a month ago.”

Getting their season back on track has put Lafayette back in control of their own destiny. With four games remaining in the regular season, the Commodores (2-5) are in a tie for second with Grenada (3-5) in the region at 2-1.

West Point and Olive Branch — who play each other this week — are sitting atop the standings at 3-0.

The Chargers have had a nearly identical start to their season, losing four of their first five games. Like Lafayette, Grenada got things turned around when they entered region play with wins over Center Hill and Lake Cormorant. They lost 28-14 to Olive Branch last week.

“If you ask our guys what our record is, they’d say, ‘2-1,’ Fair said. “It’s the first time we’ve been above .500 in something that’s mattered. This first five games, as ugly as they were at times, have prepared us for this Friday night against Grenada.”

The injury bug has lived in Lafayette’s locker room this season. Athlete Brandon Turnage went out for the season in the first half of the first game against Cleveland Central. Since then the Commodores have lost linemen and others to injuries but expect to start getting back to full strength soon.

Another issue has been the flu bug that has plagued the team the last couple of weeks.

Throughout the losing streak, Lafayette never wavered or threw in the towel early in the season. The players constantly picked each other up on the sideline and never let the negative results fester in the locker room or during the week at practice.

The results are speaking for themselves now.

“That’s something special that this place is built on,” Fair said. “It reveals a ton of character that these kids bring to the fieldhouse every week. There are places I’ve been where you start 0-5 and these folks are ready to get out of here and start something else. It hadn’t been the case with our guys. The worse it got the more they kind of stuck together.”