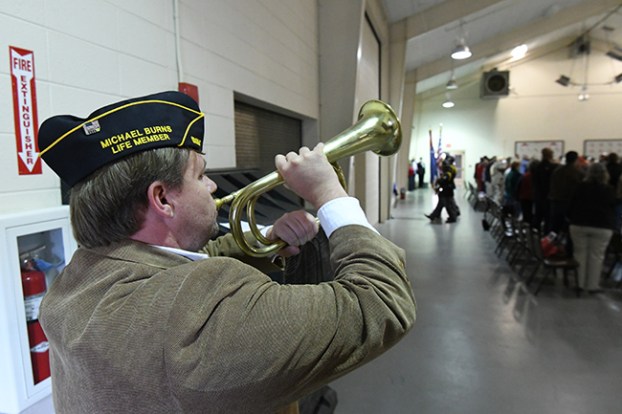 Taps is played during a Veterans Day program at the National Guard Armory in Oxford, Miss. on Friday, November 11, 2016. The armory is scheduled for renovation.

Oxford Board of Aldermen considering renovation of National Guard armory

The National Guard facility adjacent to the Oxford Conference Center could be getting a facelift soon.

Hollis Green, the director of the conference center, came to the Board of Aldermen meeting yesterday to speak with its members about possibly moving forward with the renovations project.

Updates for the new facility include a refurbished lobby and new classroom space.

“Last year, we had Casey Rogers come and do an analysis of what it would look like and of the things that we need,” Green said. “The estimated cost would be between 1.1 and 1.5 million dollars… We’re looking at about $875,000 that we have available to at least talk about the project. The real question would be: is this something the board wants to move forward with? From my perspective, it’s a no-brainer.”

Green noted that in the past year, the conference center has been sought out by six to 10 larger groups, but due to the space’s limitations, Green had to turn them down.

Even though the renovations would allow for larger groups to host events, Green spoke about the potential profit of the expanded space.

“While it will give us an opportunity to bid on bigger events, what it will really do is enhance the 2% (tourism) tax,” Green said. “If we bring in bigger events and they’re spending money at restaurants and shops, that 2% keeps turning over and over again.”

By the end of the discussion, Mayor Robyn Tannehill clarified what the board would be voting on in terms of moving forward with the project.

“This is not us committing to funds yet, this is us committing to getting a plan so we have something we can get an estimate on,” she said. “We’re looking at about $1.5 million from a previous estimate.”

The board ultimately voted unanimously to begin negotiations with architectural firm A2H.

With hordes of visitors expected to be in town this weekend as Ole Miss takes on Vanderbilt, people are encouraged... read more