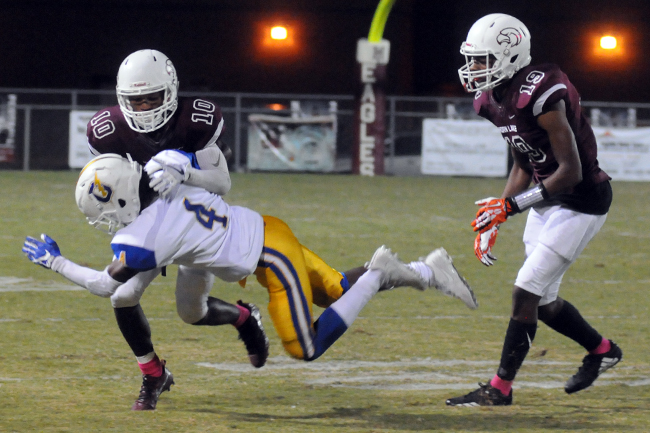 HORN LAKE – Heading into their game against Oxford, Horn Lake was averaging 41 points per game. On Friday, the Eagles (6-1, 3-1)left the field with a goose egg on the scoreboard, having been shut out by Oxford 21-0.

The Chargers defense played a large part in Horn Lake’s struggle to score as Oxford (6-3, 2-2) forced seven turnovers during the game. 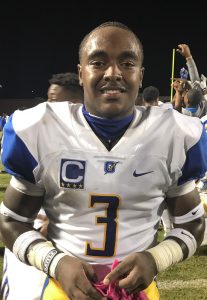 Of those seven, defensive back CJ Terrell was responsible for three. The senior plucked all three of his interceptions from Horn Lake quarterback Raydarious Jones, including one that would have been a touchdown for the Eagles. His final interception of the night – arriving halfway through the fourth quarter – was a pick-six that gave the Chargers their final points of the game.

“I’m glad I got to make a play for my team,” Terrell said, “We knew that they would come out passing the ball and we were just hoping that it would fall into one of the [defensive back’s] hands….They ran a wheel route and faked the screen, but he didn’t really sell the fake so I just stayed on the ball.”

Oxford’s defense held Horn Lake to 197 yards of offense with junior Tyler Grim earning 160 yards with a stout ground game that allowed the Eagles to move the ball up and down the field, though never into the end zone.

“I thought we tackled extremely well. There were some big moments where guys in our secondary made some tackles on some runs for maybe an eight-yard gain. If they miss it, it turns into a much bigger run. Those one on one tackles were huge,” Oxford head coach Chris Cutcliffe said.

Offensively, the Chargers finished the night with 293 yards, aided by the 85-yard touchdown pass from quarterback John Reece McClure to senior wide receiver Jaquan Webb. Webb’s long run to the end zone in the third quarter stretched Oxford’s lead 14-0 with McClure putting the Chargers on the board in the second quarter with a 21-yard touchdown run of his own.

McClure finished the night completing 13 of 16 passes for 168 yards and two touchdowns.

After staring 0-2 in Division 1-6A play, Oxford’s win gives the team a bit of momentum heading into another division contest on Oct. 20 though the Chargers aren’t looking ahead just yet.

Oxford swimmers set for North Half meet at Delta…