Ole Miss’ defense turns up pressure in win over Vanderbilt 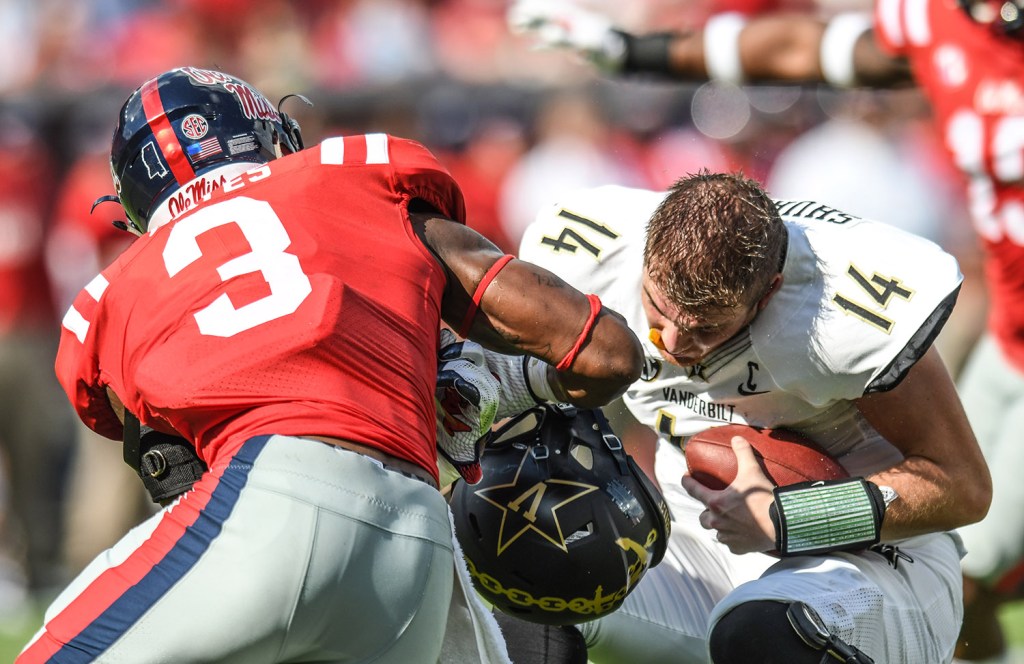 Teams haven’t felt much of a rush from Ole Miss’ defense this season.

The Rebels began the day 126th nationally with just four sacks, but Ole Miss’ front seven got after Vanderbilt quarterback Kyle Shurmur throughout a 57-35 win at Vaught-Hemingway Stadium. The Rebels racked up seven sacks, recording two of them within a span of 10 minutes in the first quarter and surpassing their season total by the second quarter.

It’s the most sacks for Ole Miss since notching seven in the Egg Bowl in 2015.

“It was about communication, alignment, getting lined up right and being in the right spot over and over and over again,” interim coach Matt Luke said.

Vanderbilt had only given up three sacks through its first six games, but Ole Miss changed up some of its looks to give the Commodores fits up front. The charge was led by Marquis Haynes, who had been quiet for most of the season.

The Rebels’ rush specialist had just 1.5 sacks through the first five games but set the school’s modern-day career sack record by getting loose for three, a career-high for the senior. Outside linebacker DeMarquis Gates lined up on the end at times and notched a pair of sacks, Josiah Coatney added one, and Austrian Robinson and freshman Ryder Andersen combined for another.

“We changed up a couple of his locations on alignments,” defensive coordinator Wesley McGriff said, “and I just told (Haynes), ‘You play pass first, and you go react to the run.’

“It wasn’t an elaborate scheme deal. They had some formations we thought we had a handle on in terms of calling, but in terms of protection, it’s just that we’ve got to line up, go and win some one-on-one battles.”

Some of the takedowns were timely.

Ole Miss notched five of its sacks in the first half, including Haynes’ first strip-sack of Shurmur midway through the second quarter with the Rebels trailing 14-7. Benito Jones recovered for Ole Miss at Vanderbilt’s 27-yard line, and quarterback Shea Patterson scored on a 4-yard run four plays later to start a 28-0 run for the Rebels.

Vanderbilt ended its drought with a 75-yard touchdown drive late in the second quarter to cut the Rebels’ lead to 35-21 at the half and got the ball to open the third quarter with some momentum. But Haynes came off the edge on the Commodores’ third play of the half and knocked the ball from Shurmur’s hand and into the end zone. Vanderbilt recovered the fumble for a safety, and Ole Miss didn’t lead by fewer than three touchdowns the rest of the way.

“That’s always important,” receiver A.J. Brown said. “The defense is getting turnovers, it makes our job a lot easier when we don’t have to drive the whole field.”

Ole Miss also hurried Shurmer five other times. The pressure highlighted an active day for the defense at each level as the Rebels racked up eight tackles for loss and had eight pass breakups.

“The defense kept giving us chances, and I think that’s a huge deal,” Luke said. “I think to win football games, you have to feed off each other. I think we did that today.”