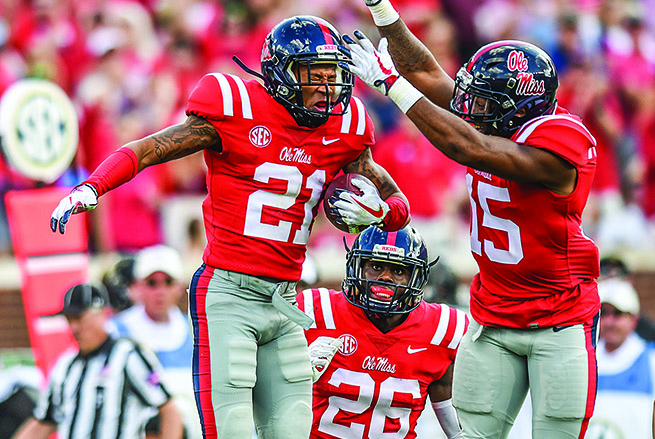 Final: Ole Miss 57, Vanderbilt 35. Rebels win their first SEC game of the season and end a three-game skid. LSU and Ed Orgeron up next

On the second play of the fourth quarter Kyle Shurmur hits Jared Pinkney for a one yard touchdown pass. Ole Miss 47, Vanderbilt 28 14:39 4Q

The second half could not have started any worse for Vanderbilt. On third down inside their five yard-line Shurmur fumbled the ball and it rolled into the end zone. Commodores recovered for a safety. Marquis Haynes forced the fumble. Ole Miss 37, Vanderbilt 21 14:02 3Q

Javion Hamiltion picks off Shurmur’s pass — only his second interception thrown all season — and takes it to the Vanderbilt 30. DeMarkus Lodge scores with a six-yard reception for his second touchdown of the game. Ole Miss 35, Vanderbilt 14 2:02 2Q

Marquis Haynes forced a fumble and Benito Jones recovered it to give Ole Miss good field position at the Vanderbilt 29. Patterson cashes in on a four-yard run. The Rebels have scored 14 points in 2 minutes and 31 seconds. Ole Miss 21, Vanderbilt 14 7:13 2Q

The Rebels punt and Vanderbilt takes advantage of the short field. Ralph Webb scores his second touchdown of the game on a one-yard run. Vanderbilt 14, Ole Miss 7 9:52 2Q

Ole Miss had a 75 yard touchdown run by Jordan Wilkins negated when Daronte Bouldin was called for holding. The Rebel sideline was then flagged for unsportsmanlike conduct to kill the drive.

Vanderbilt ties things up with a 38-yard run by Ralph Webb. The play previous Ole Miss’ Jarrion Street had a Kyle Shurmur interception go through his hands that resulted in a 23-yard gain. Ole Miss 7, Vanderbilt 7 14:04 2Q.

End of 1st Quarter: Ole Miss 7, Vanderbilt 0. The Commodores are moving the ball and will have a 2 & 5 at their 39 to start the second quarter.

Vanderbilt forced to punt on their next possession. Then three plays later Ole Miss gets on the board with a 58-yard touchdown reception by A.J. Brown. Brown flat out ran one Vanderbilt defender and split two more. Just has another gear. Ole Miss 7, Vanderbilt 0 6:54 1Q

Ole Miss’ second drive went better as they were able to move down the field. The drive stalled at the Vanderbilt 29 when the Rebels failed to convert on a 4th and 2. Scoreless 9:23 1Q

Vanderbilt’s drive began with a forced fumble my Jaylen Jones but the Commodores recovered for a 23-yard gain. The Rebel defense held with a Marquis Haynes sack. Tommy Openshaw then missed a 46-yard field goal. Scoreless 11:33 1Q

The opening drive did not go Ole Miss’ way. A.J. Brown was called for a false start and Shea Patterson was sacked. The Rebels punt it away. Scoreless 13:21 1Q

Kickoff is set for 2:30 p.m. Check back here for scores and live updates.