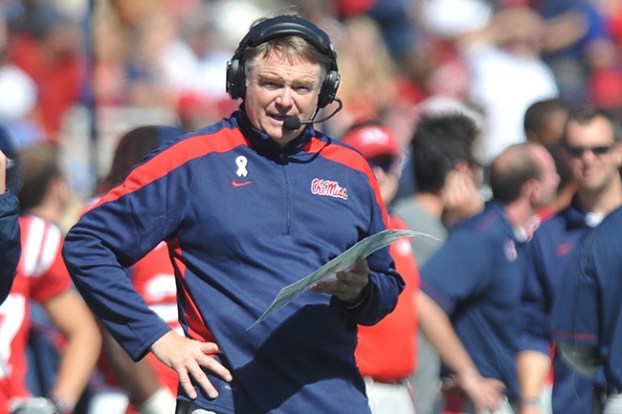 The legal saga between Houston Nutt and Ole Miss is over.

The Rebels’ former football coach and the school have reached an agreement “that would allow the parties to resolve Coach Nutt’s claim while avoiding the costs and distractions associated with further litigation,” according to a joint statement released by the school Monday. The decision was made after lawyers for both sides communicated for the past few weeks about the lawsuit filed by Nutt in Lafayette County Circuit Court last week against Ole Miss, the athletics foundation and the IHL board.

“I am pleased to put the lawsuit behind me,” Nutt said in a statement. “Best wishes to the future of the Ole Miss football program.”

In the lawsuit, which was refiled at the state level after originally being filed and dismissed in federal court this summer, Nutt was suing for breach of contract, breach of duty of good faith and fair dealing and punitive damages for what he alleged was an intentional misinformation campaign put on by former Ole Miss coach Hugh Freeze and other school officials related to the extent of the role Nutt’s tenure played in the program’s NCAA investigation.

In the 46-page complaint, Nutt accused Freeze, athletic director Ross Bjork and associate athletic director of communications Kyle Campbell of conspiring to spread misleading information about how many of the alleged rules violations were tied to Nutt’s tenure by pushing the narrative in off-the-record phone calls with reporters. The complaint also accused other school officials of making calls to journalists around the time Ole Miss received its initial Notice of Allegations in January 2016.

Nutt’s side claimed that any such statements violated his severance agreement, which was a point of contention as Ole Miss argued the agreement was directed at a control group that didn’t include Freeze, Bjork or Campbell, but Nutt’s attorneys, Thomas Mars and Walter Morrison, claimed the wording was too vague.

But something changed with a settlement — details of which weren’t disclosed — that comes months after Nutt reportedly requested an apology from Ole Miss. That didn’t happen until Monday.

“Certain statements made by University employees in January 2016 appear to have contributed to misleading media reports about Coach Nutt,” Ole Miss said in a statement. “To the extent any such statements harmed Coach Nutt’s reputation, the University apologizes, as this was not the intent.The NCAA’s Notice of Allegations dated January 22, 2016, did not name or implicate Coach Nutt in any misconduct, and it would have been inappropriate for any University employee to suggest otherwise.”

But the lawsuit still left its mark.

In attempt to prove his client’s claims, Mars filed an open records request for Freeze’ university-issued cell phone records, which revealed a call made to a number linked a female escort service. A more thorough examination of the records led to the discovery of what Bjork called a “concerning pattern” of personal behavior that led to Freeze’s forced resignation July 20.

Ole Miss is facing 21 alleged rules violations, including 15 Level I charges, which are deemed the most serious by the NCAA. Four of those are tied to Nutt’s tenure, which ran from 2008-11.

The school’s case was heard by the Committee on Infractions over two days last month in Covington, Kentucky. A final ruling is expected to be issued sometime in November.

Responding to ideas and hopes expressed more than a year ago at the University of Mississippi’s first-ever universitywide Town Hall,... read more