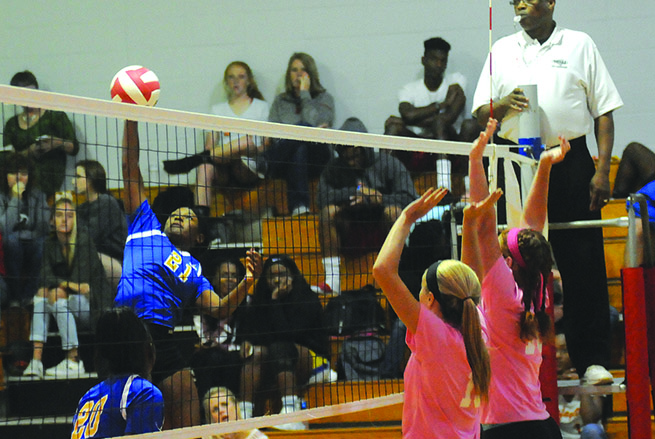 It was a match that had little bearing on anything other than staying fresh for the playoffs.

For Oxford it was a way to shake off rust of a layoff and two bad losses before they begin their run at a Class III state title. The Chargers did just that with a 3-0 (25-12, 25-13, 25-20) sweep over crosstown rival Lafayette inside the Lafayette Middle School gym on Monday night.

The match was moved from its original date of Oct. 5 due to both schools’ football teams having games on that date.

There was not much to the first sets with the Chargers (20-9) taking command early with little resistance from the Commodores (10-10). Oxford used the match to prepare for the postseason as well as their future. Head coach Kacie Hengler trotted out her starting lineup in the first set and what her potential starting lineup for next season might be in the second set.

“We had a couple hard games lately and took a little time off,” Hengler said. “Homecoming week we didn’t have any games so I thought the girls got in a little lull. So my goal tonight was to just get us back in rhythm. When they play with confidence they’re on fire. Tonight we had a lot of fun.”

The third set was slightly more competitive with Lafayette keeping close and tying the set up three times throughout. The Chargers, who let their starters play whatever position they wanted in the third set, were able to pull away for the sweep.

Lafayette’s success in the third set was what has been a common denominator all season in both their wins and their losses.

“We didn’t serve well,” Jordan said. “I know we had at least eight serving errors and we didn’t serve-receive well. You don’t do those things well, you can’t win. Third set we served-received it well. A little bit of that was (Oxford) let up on us a little bit. We made a run because they did and I was proud of them for that. We saw an opening and tried to take advantage of it.”

Senior Jordan Freeze had eight kills for Oxford while Kate Sudduth had five digs. The Chargers had 18 aces as a team.

For Lafayette, Juliana Ingram and Sarah Ray Goolsby had three kills each while Madison Danile finished with seven digs. The Commodores came away with one ace from Xhiir Burgess.

Playoff push
Up next are the MHSAA playoffs.

Both matches will take place on Thursday.