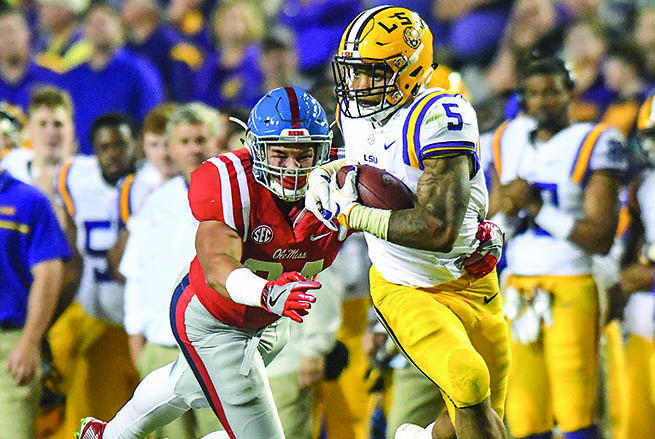 LSU’s offense under first-year coordinator Matt Canada features some new wrinkles, but one thing remains constant for the Tigers: a big-bodied running back that makes it all go.

It was future first-round draft pick Leonard Fournette who terrorized Ole Miss last season with a then-school record 284 yards in LSU’s 38-21 win in Baton Rouge. This year, the Rebels will have to deal mostly with Derrius Guice when the teams renew their rivalry at Vaught-Hemingway Stadium on Saturday (6:15 p.m., ESPN).

“He is the cornerstone of the offense,” Ole Miss defensive coordinator Wesley McGriff said.

Already the ninth-leading rusher in LSU history as a junior, Guice led the SEC in rushing last season despite sharing the backfield with Fournette while averaging a whopping 7.6 yards per carry. Guice has been slowed by an injury this season, averaging fewer than 73 yards in the six games he’s played in, but the 5-foot-11, 218-pounder has still gotten more carries than any back on LSU’s roster with a powerful running style that can take a physical toll on defenses as the game wears on.

“We have to do a great job at tackling him,” interim coach Matt Luke said. “One-on-one, he’s going to win that matchup an awful lot, so we’re going to have to get a lot of people to the ball.”

LSU has used all the attention defenses pay to Guice to rip off explosive plays from other spots on the field.

The Tigers (5-2, 2-1 Southeastern Conference) have utilized the speed of receivers Russell Gage (168 rushing yards) and D.J. Chark (60) on jet sweeps to the perimeter when defenses start squeezing in. Commit more defenders to the box to stop Guice, and quarterback Danny Etling usually connects with the 6-4 Chark (team-high 535 receiving yards) through the air against more man coverage.

“They have a real good scheme,” defensive end Marquis Haynes said. “They try to outflank you, and they’ve got a good jet sweep going. We really have to prepare, be focused and be ready for those plays.”

It will be the latest test for an Ole Miss defense that won’t have as many reinforcements as usual up front. Ends Qaadir Sheppard (ankle) and Victor Evans (leg) will have surgery this week and won’t play Saturday, leaving Haynes and Breeland Speaks, who recently moved outside from the three-technique, on the edge. Junior college transfer Markel Winters and true freshman Ryder Anderson are the next options at end, defensive line coach Freddie Roach said.

More than anything, Guice will test the strides in consistency coaches believe the Rebels (3-3, 1-2) are making when it comes to alignment issues that have contributed to Ole Miss being 117th nationally against the run. The Rebels have allowed at least 163 yards on the ground in every game this season with Vanderbilt’s 188 yards last week being the fewest they’ve yielded in an SEC game.

“We’ve got to be able to go four, five, six plays and be consistent at our job. It’s just little things,” Roach said. “I don’t think people realize how much little things affect a ball game. We’ve got to continue to harp on that, demand it, and when you do that, you start seeing these players get better.”

Being out of position against Guice could mean the difference in a first down and a touchdown and would make it hard to stop everything else that comes with LSU’s retooled offense.

“I think he’s an NFL running back,” McGriff said. “Just studying him on tape, the guy is explosive. He can hit a home run from anywhere on the field.”