Lafayette looks to get back on track against Center Hill 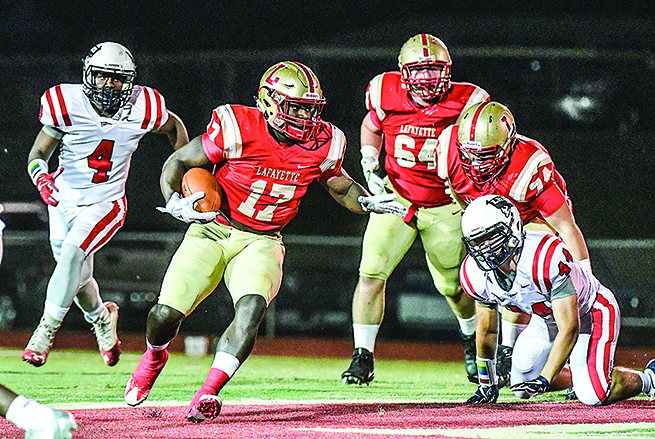 Last week Lafayette faced a setback. This week they look to get back to their winning ways and back in playoff contention.

The 14-12 loss to Grenada last Friday ended a two-game winning streak by the Commodores, which followed a five-game losing skid to begin the year.

“They’re all big,” Lafayette head coach Michael Fair said. “Because of the way (last) Friday turned out I think they all have equal importance from here on out. I think there’s diffferent ways and difference scenarios but we’re not even letting outselves look at it like that. It’s a big game and a must win for us.”

At the midway point of region play the Commodores find themselves in a tie for fourth with Lake Cormorant in the region standings. Lafayette and the Gators play in the regular season finale on Nov. 3.

The Mustangs are coming off a 40-27 loss at Lewisburg last week after winning their first game of the season in a 20-9 victory over Saltillo on Oct. 6.

“You kind of want to look at the schedule but you really can’t because all that matters is this game Friday,” Fair said. “It would be nice to kind of look down the road and see where we’d be for seeding purproses but we got to get in (the playoffs). To do that you got to win. You take one Friday night at a time. I think that’s how you do it.”

Lafayette will need to jumpstart their offense that had scored 79 points in their two wins before stalling against Grenada last week. Center Hill’s defense has proven difficult to slow down opposing offenses, giving up 36.2 points a game.

The most points the Mustangs have allowed is 56 to West Point and the lowest is nine in their win over Saltillo.

“(Center Hill) is a good football team,” Fair said. “They’re kind of like us in a way. Their record doesn’t really show the growth that they’ve had throughout the year. We feel like they’ve gotten better each week that we’ve seen on film.”

A new wrinkle for the Commodore defense to prepare for this week has been the Mustang’s triple option offense.

The triple option is rarely seen at the high school level, but it is something that does still exist and defense must prepare for.

While the triple option is mostly a run-first offense, Hardin has thrown for nearly 100 yards but three of those passes have been picked off.

“That poses a whole new set of problems for a defense because you just don’t see it,” Fair said. “What they do is sound and they’re good at it.”