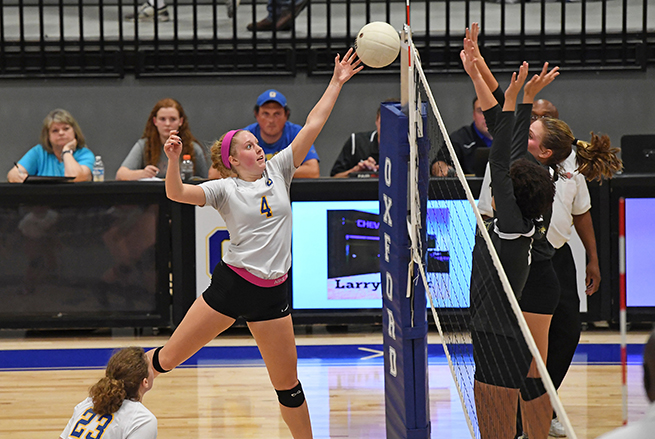 Oxford's Jordan Freeze (4) tips ball during their match against Northwest Rankin. The Chargers won 3-0 to advance in the Class III playoffs. (Thomas Graning)

History was made on Thursday night.

Oxford earned its first win in either Class 6A or Class III postseason play in school history. The Chargers defeated Northwest Rankin 3-0 (25-13, 25-19, 25-19) in the first round of the MHSAA Class III volleyball playoffs.

The Chargers (21-9) advanced to Tuesday’s quarterfinal round when they travel to DeSoto Central. The Jaguars defeated Warren Central 3-0 in their first round match.

The reigning Class II champions have only dropped one set in their last five playoff matches dating back to last season’s first round match against Lafayette when they won 3-1.

“I thought (Northwest Rankin) would have improved a little more this season but I also thought we played really well,” Oxford head coach Kacie Hengler said. “On mistakes we made they were aggressive errors and those are the kind I like as a coach. We were really going after it. I hope we have the same thought process going into Tuesday.”

The Chargers and Cougars met during the Set It Off Challenge back in August in Ridgeland with Oxford coming away with a 2-0 win.

That match at the start of the season was near identical to how Thursday’s match went with the Chargers dictating the pace. The Cougars (9-12) took advantage of a few Oxford mistakes in the later sets but could never really pose a serious threat.

The Chargers returned to their own gym for the first time in over a month after the OHS gym floor had to be repaired due to damage done to the court.

They were allowed back in on Tuesday and used the two days to practice and get re-acclimated.

“I really preferred that,” Hengler said of back-to-back practices. “We’re going to do the same thing before Tuesday’s match. It just gives us a certain kind of momentum. In breaking it up, I feel you don’t get everything accomplished in one practice.”

Advancing to Mississippi State — the site of this year’s semifinals and finals — will prove to be a tough challenge for Oxford. The Chargers’ foe in DeSoto Central is one who has already proven capable of defeating them.

“When we played (DeSoto Central) last time I felt we played timid,” Hengler said. “When we serve like we did tonight teams have a really hard time beating us.”