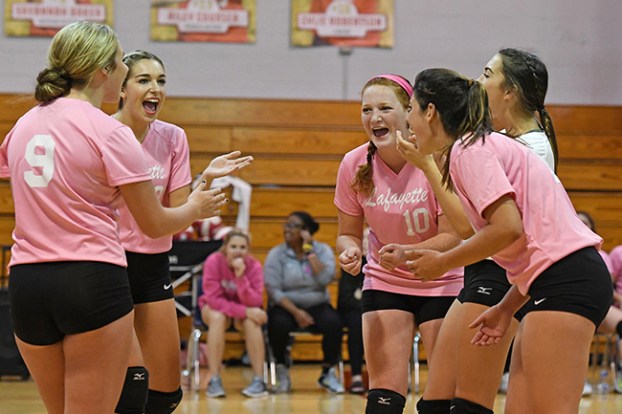 It took five sets, but the Lady Commodores got the job done.

Lafayette defeated Corinth on Tuesday 3-2, gaining a victory in the opening round of the Mississippi High School Activity Association’s Class II Volleyball playoffs.

“It was just a dogfight from beginning to end,” Lafayette head coach Clint Jordan said.

In set one, Lafayette held the largest lead at 19-15, earned after a serving ace by Sarah Rae Goolsby and two tips over the net from Xhiir Burgess. Corinth battled back to tie the set at 22-22, aided by an ace from Lady Warriors (15-9) setter Sarah Bickert.

After allowing one more point to put the Lady Warriors up 23-22, Lafayette bounced back with three straight points, taking the first set 25-23.

Set two went to Corinth, 25-18, as the Warriors dominated the early part of the match to lead the Commodores 15-7 and cruised through the remainder of the match.

Tied at 1-1, set three fell in favor of the ‘Dores who outscored Corinth 12-1 after opening the game down 10-5 to the Warriors. Two errors by Corinth, along with a kill from Burgess and a couple of tips over the net by Lafayette saw the Commodores tie the game at 19-19. Lafayette allowed one more point to the Warriors – earned by a net violation – before posting six straight, including a pair of aces from Cylie Robertson, to win 25-20.

“I believe we were down 20-15 when I called that timeout,” Jordan said, “I told them ‘no matter what happens we’ve got to gain some momentum. Let’s not take any chances, let’s play smart, serve well, and make sure we put some pressure on them by playing the ball back.’ And we did that. I have no doubt that run we were on switched the match, without that run we probably aren’t able to get a win tonight.”

Led by senior Kristen Herman, who racked up three aces, four kills, and two blocks in the fourth set alone, Corinth took the win in set four at 25-18, taking the lead early and never looking back.

Corinth’s win in the fourth set tied the game 2-2, forcing a fifth set that determined the outcome of the match.

The final set was a back and forth affair. Corinth remained in the driver’s seat for much of it, earning the lead at 6-5 behind a block from Herman. The Warriors maintained that lead until  a pair of aces from Julianna Ingram tied the game at 10-10, a point earned by Goolsby put the Commodores up 11-10, a lead which they never gave up en route to a 15-13 set win.

“Our strategy tonight was really just to attack every swing. We wanted to get four hands on every ball, whether that was inside or outside. We are athletic and in order for us to play to our strengths, we have to do that and it worked for us tonight,” Jordan said.

Lafayette advances to the second round, set for Oct. 24, where the Commodores will face Lake Comorant.