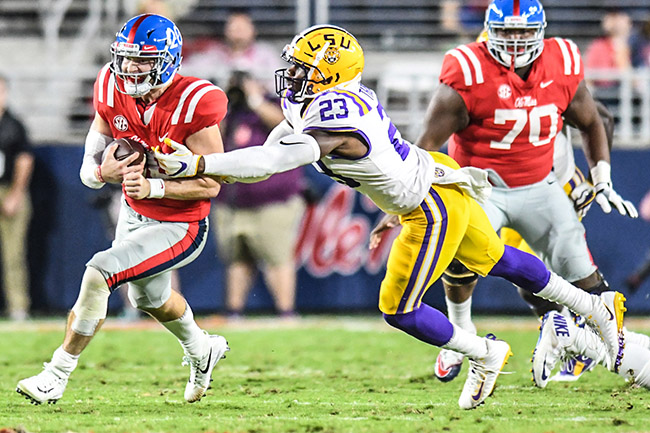 Ole Miss lost to LSU on Saturday. Now the Rebels will wait to see if they’ve lost their quarterback for any length of time, too.

Shea Patterson suffered a sprain to his right knee late in the first half and will be evaluated furthur over the weekend to determine the severity, interim coach Matt Luke said after the Rebels’ 40-24 setback. Patterson limped to the locker room with less than 2 minutes left in the second quarter after being tended to in the medical tent in the sideline. The injury came after Patterson was intercepted by Grant Deplin on the Rebels’ second-to-last possession of the half.

An Ole Miss spokesperson said Patterson was questionable to return, but the SEC’s leading passer started the second half, though he didn’t finish it. Patterson finished 10 of 23 for a season-low 119 yards and completed just five of his 14 passes in the second half before being replaced by Jordan Ta’amu after taking his third and final sack early in the fourth quarter.

Ta’amu, a junior college transfer, led the Rebels to a field goal on their final drive of the first half and led a touchdown drive late in the fourth quarter. He went 7 of 11 passing for 78 yards and added 20 yards on the ground on three carries.

Patterson came into the game leading the SEC in passing with 2,143 yards and 17 touchdown passes against six interceptions.