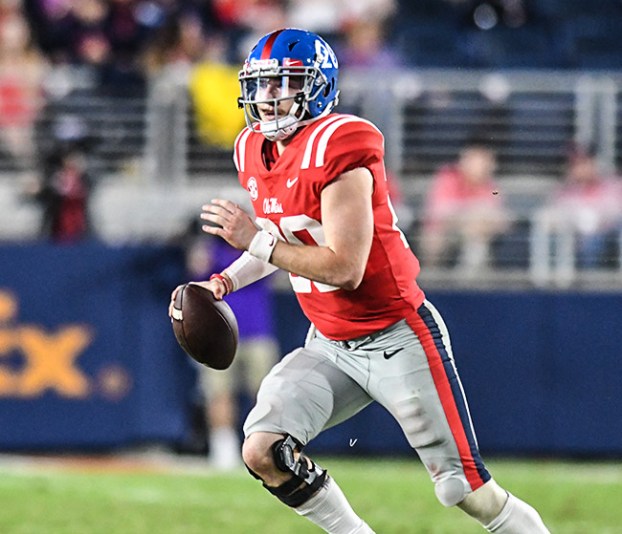 Ole Miss quarterback Shea Patterson will miss the remainder of the season with a torn posterior cruciate ligament.

Interim coach Matt Luke said following the Rebels’ 40-24 loss to LSU on Saturday the initial diagnosis for Patterson was a sprained right knee, but an MRI taken taken after the game revealed the torn ligament, an Ole Miss spokesman said Sunday. Patterson suffered the non-contact injury after throwing an interception late in the first half.

Patterson went to the locker room for further evaluation but returned to start the second half before eventually being replaced by Jordan Ta’amu in the fourth quarter. The sophomore finished 10 of 23 through the air for a season-low 119 yards.

With Patterson out, Ta’amu will permanently take over the reins of what’s been the SEC’s top passing offense all season. Ta’amu, a junior college transfer, went 7 of 11 for 78 yards and led a pair of scoring drives in Patterson’s absence against LSU — a field goal on Ole Miss’ final possession of the first half and a touchdown late in the fourth quarter.

Offensive coordinator Phil Longo said the offense wouldn’t change much with Ta’amu behind center with the signal callers having similar skill sets.

Asked after Saturday’s game if he trusts Ta’amu to run the entire offense if it came to that, Luke answered in the affirmative. Ta’amu has played in three games this season, much of those snaps coming in mop-up duty.

“He can do some things with his legs, and I was impressed with him throwing the ball tonight,” Luke said. “He led us on touchdown drives right before the end of the game. At the end of the half, he led us on a field-goal drive. I think that gave him some valuable experience where if that is the case (that he has to play), I’ve got a lot of confidence in him.”

There’s a lot of production for Ta’amu to try to replace. Patterson is leading the SEC in passing yards (2,259 yards), passing yards per game (322.7) and touchdown passes (17).

The new Comprehensive Plan could be adopted for Lafayette County in less than a month’s time after more than a... read more