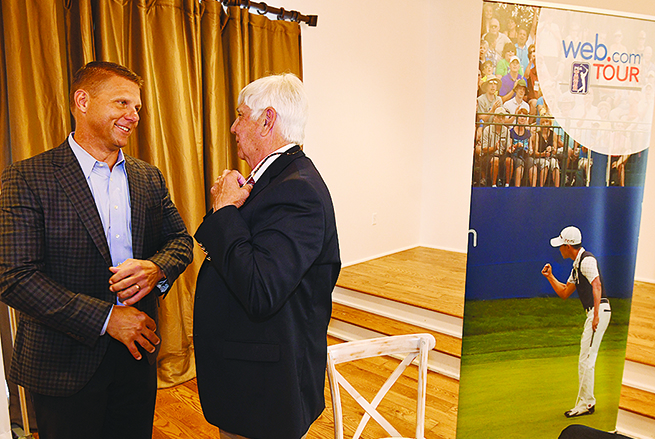 With six months remaining before Oxford hosts its first-ever PGA event the planning and preparations are well underway.

Since the announcment of the Web.com’s newest tour stop back in June with the North Mississippi Classic debuting April 16-22, 2018 the Country Club of Oxford has been busy.

So has the City of Oxford.

Planning meetings have already been held and with more scheduled to take place more frequesntly after the calender turns from 2017, things are about to get busy.

“(There’s been) a lot behind the scenes work kind of moving forward with everything,” Steve Jent, the tournament director for the North MS Classic, said. “A lot of a golf tournament is the oprational planning. We’ve met with city and county officials on things that we need talk to them with.”

Jent will be more hands on in Oxford in the coming weeks after this week’s PGA Tour event in Jackson.

Jent is also the tournament director for the Sanderson Farms Championship, taking place at the Jackson Country Club.

A massive event such as this is nothing new for Oxford, who hosts Southeastern Conference football games seven weekends out of the year as well as other events including Double Decker and the ever-growing Oxford Film Festival every February.

April will be a busy time with the North MS Classic taking place the weekend before Double Decker.

The Ole Miss baseball team is also hosting a weekend series with Georgia the same time the tournament will be going on across town.

“It’s been great,” Jent said of working with Oxford officials. “Mayor (Robyn) Tannehill has been amazing to work with. The police, fire, everbody has been supportive. Everybody seems really excited and I know they are. It’s going to be a really good partnership.”

As for the course itself, tournament officials are pleased with the setup of the Par 72, 7,028 yard Jim Fazio designed course at the Oxford Country Club.

When the 156 Web.com players descend upon Oxford they will be playing a course that is not going to undergo any changes in the next six months.

They will play it as it lies.

“It’s challenging,” Jent said of the course. “It’s tough shots off tee and some very challenging greens. I think it’s going to be a good test for these guys when they’re here in the spring. …They think it’s a perfect fit (on the tour).”

The Web.com tour provides something unique the PGA Tour does not. Players and caddies stay with host families as they usually can not afford housing on their own week-to-week. Jent noted they are still looking for more familites to volunteer any housing they can provide.

As the tournament draws nearer, more information can be found on the official website at www.northmsclassic.com.

What to expect from new Ole Miss starting quarterback…