Religion, light and technology come together in Oxford’s new exhibit at The Edison 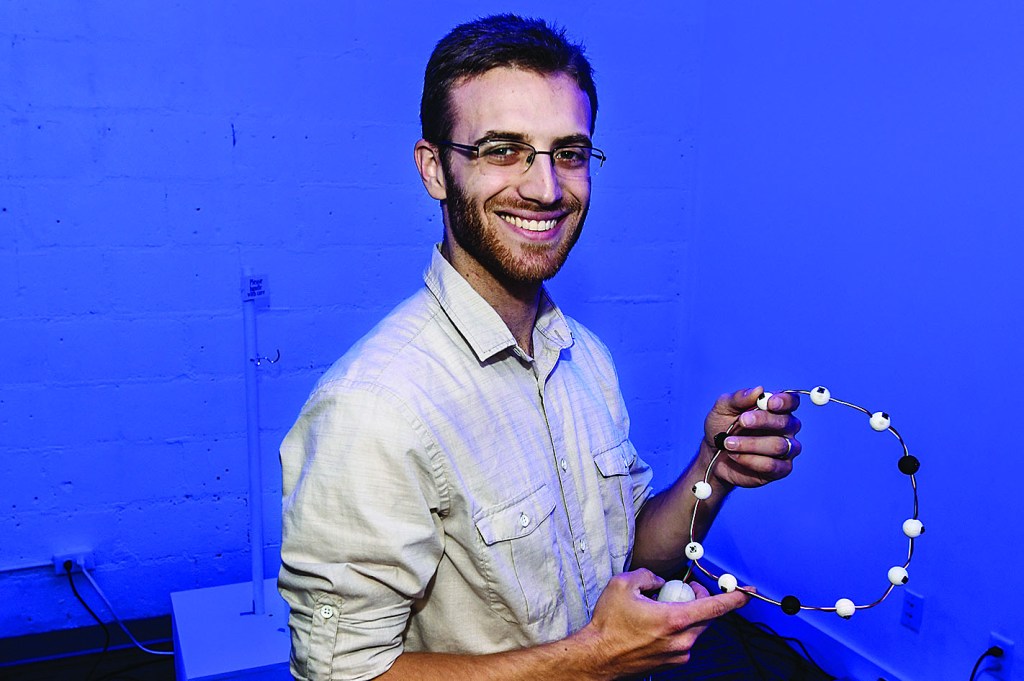 Visiting artist Eric Valsin, in Oxford, Miss. on Monday, October 23, 2017, has an exhibit at The Edison.

Misbits Gallery in Oxford is opening an exhibit tonight that explores the crossroads between art, religion and technology.

New Jersey-based artist Eric Valosin will be unveiling “For (Loop) {Meditations;},” an artwork that utilizes 3D-printed beads that symbolize a rosary, circuitry and projectors. An opening night reception will be taking place tonight at Misbits from 6 to 8 p.m.

When each bead is pressed, it controls an iteration through the pixels of an image and then fill the room with the color of the light of that pixel.

“You can get an immersive experience of the image pixel by pixel,” Valosin explained on Monday. “All these projectors will show that color of that pixel.”

The 30-year-old was inspired by an exhibition he saw that included Tibetan prayer beads. Valosin was raised in the United Methodist Church.

“I started to think about how in various traditions, rosary included, when your prayer beads, you’re iterating through a prayer,” Valosin said. “From bead to bead, with each one you say a prayer. That’s exactly how a computer views an image. I started thinking of the computer function as the form loop function, which is how a computer would view an image. Essentially, it’s meditating.”

The artist called this “an interesting way to explore the iterative nature of spirituality and of technology and allow you to have an immersive experience of a digital image.”

The beads are wired so that it’s running two alternating circuits.

“Every other bead is on a circuit, so it can tell when you advance from one to the next,” Valosin said. “It takes the RGB values of that pixel and outputs it to the projectors.”

Though the project is technologically heavy, Valosin says he has more of a background in the arts.

“I started to realize that a lot of my spiritual preconceptions were rooted in the 14th century or earlier,” he said. “In grad school, I started to read some philosophy and realized that generally don’t see the world that way anymore, but we still hang on to these vestiges of that old worldview when it comes to spirituality. I thought about what it means to have a spiritual experience with post-modernism and Nietzsche saying ‘God is dead,’ and how cyberspace has replaced sacred space.’

The gallery is open on Monday, Tuesday and Wednesday from 9 a.m. to 2 p.m.