Back on track, Lafayette travels to Olive Branch 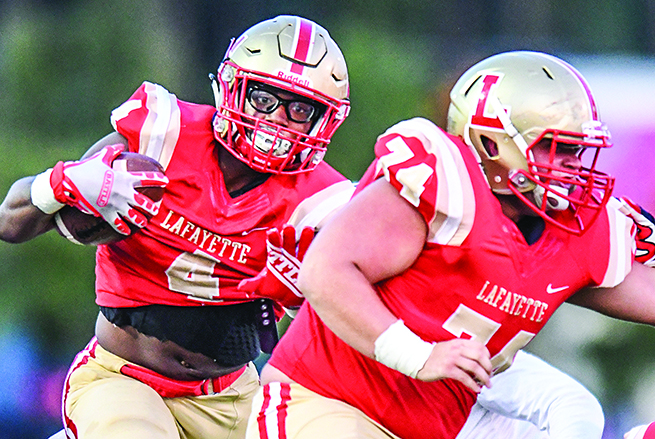 Lafayette got their season turned back around last week with a win over Center Hill. They now must keep it heading in the right direction against Olive Branch.

The Commodores hit the road for their final road game of the regular season and must take on a Conquistador team that has bounced back from their pummeling by No. 1 West Point two weeks ago.

The playoff hopes for both teams are not the same with Olive Branch, ranked No. 4 in the Class 5A in this week’s AP poll, sitting pretty at No. 2 in the Region 1-5A standings behind the undefeated Green Wave with a 4-1 record. Lafayette’s is a little more murky, tied with Grenada for the third seed and only a game above Lake Cormorant, which is in the fourth and final playoff spot at 2-3.

Olive Branch (8-1) defeated Lake Cormorant 37-0 after losing to West Point 51-7 the week prior. A loss for the Conquistadors is not major for them but a Lafayette win is crucial with a regular season finale matchup at home against Lake Cormorant next week. That game with the Gators could be an elimination game.

Lafayette has gotten their ground game back in form since entering region play. A Jamarcus Quarles at full strength has helped the Commodores’ take the pressure off quarterback Randy Anderson and their passing game.

“You got a 10th-grade quarterback out there and he’s seeing things for the first time,” Fair said of Anderson. “Seeing defenses for the first time and the bullets are moving a little faster than they did the year before. It really helps. I think it starts up front. Of course Jamarcus is having a great year and finishing strong, but our offensive line has gotten better.They’ve gelled over the last month or so and they’re playing well.”

Kickoff is set for 7 p.m. at Olive Branch High School and can be heard locally on 105.1 FM.