‘We’ve got to find ourselves’: Ole Miss still seeking answers against run with Arkansas up next 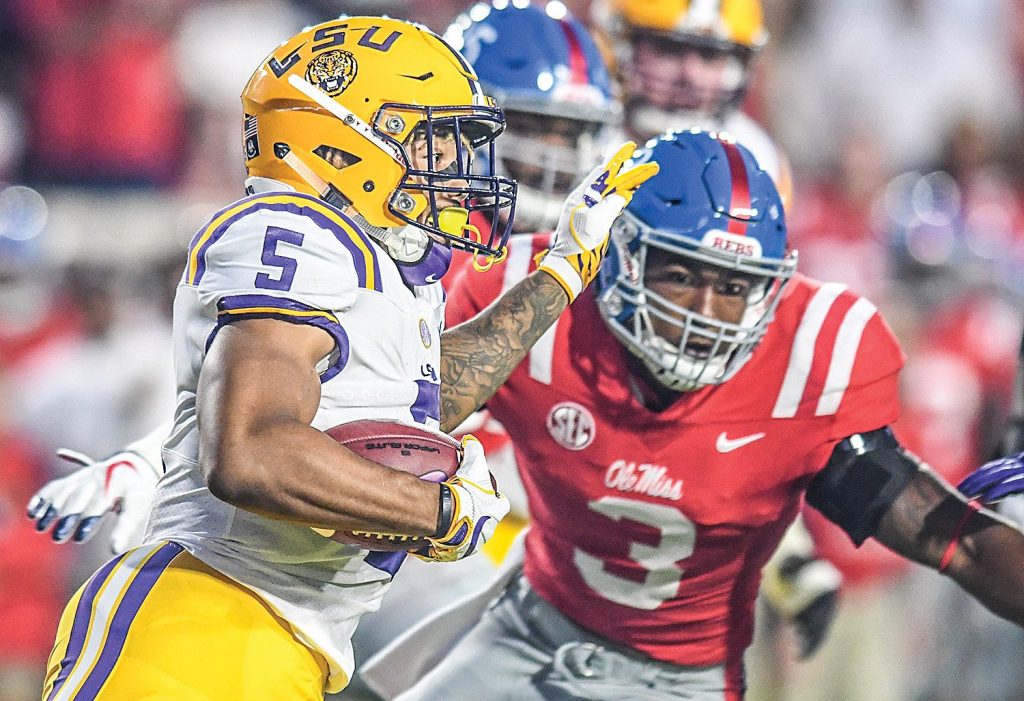 Matt Luke knows what’s in store for his defense Saturday against Arkansas. Truth be told, he’s known for weeks.

Ole Miss is trying to recover from another week of getting run through, around and over. The Rebels allowed 393 rushing yards — and 7.1 yards per carry — in last week’s 40-24 loss to LSU, adding to the season-long struggle they’ve had of stopping anything that moves on the ground.

Ole Miss (3-4, 1-3 SEC) has allowed at least 188 yards on the ground in each of its four SEC games, a number LSU’s Derrius Guice nearly had by himself in the first half last week on his way to a 276-yard night. The Tigers, Alabama and Auburn each rumbled for at least 325 yards while Ole Miss hasn’t held any team to fewer than 163 rushing yards all season.

With five games left, the Rebels are last in the SEC and 126th out of 129 FBS teams against the run, yielding 260.6 yards per game.

“It’s the midpoint of the season. We’ve got to find ourselves,” defensive tackle Josiah Coatney said. “There’s no other way we can do it. We’ve got to get it turned around point-blank.”

Can Ole Miss do that at this point? Coaches and players have talked ad nauseum about misalignments and being out of position being the overriding culprits, but is there more to it than that?

“We’ve got the players,” McGriff said. “They’ve just got to go out and execute.”

Guice racked up his yards on just 22 carries, an average of 12.5 yards a touch. At one point, he was going for more than 15 yards per carry as the Tigers’ junior back ripped off chunk after chunk against an Ole Miss defense that often times didn’t have someone near Guice until he was into the second level. The 5.7 yards per carry Ole Miss is giving up is fourth-worst nationally.

“It’ll be one play where somebody messes up and somebody else messes up and it’s 7 yards. You can’t do that,” Coatney said. “You’ve got to be disciplined every play. That’s something we’re really just working on.

“We know we can (stop the run). It just be the smallest fits that are incorrect. And in the SEC, small fits against great running backs like Guice, ‘Bama, Auburn, they’re going to take it.”

One remedy McGriff said he’ll try this week is getting some bigger bodies on the field to combat an Arkansas offense that will likely lean on its ground game more than usual with 6-foot-7, 270-pound backup quarterback Cole Kelley in line to get his second straight start for the injured Austin Allen. The Razorbacks (2-5, 0-4) are running for 161 yards per game.

With the Razorbacks’ heavy packages featuring bigger linemen and more tight ends than most teams Ole Miss faces, the Rebels plan to bulk up by going away from their base nickel defense at times and putting an extra linebacker on the field. McGriff said 242-pound junior college transfer Brenden Williams and Jarrion Street, who’s back from a concussion, are linebackers who could see their snaps increase this week and could find themselves on the field with DeMarquis Gates at the same time in certain packages to give the Rebels extra “weight in the box” with defensive ends Qaadir Sheppard (ankle) and Victor Evans (leg) out for the second straight week.

But for his group, any personnel grouping comes with a fundamental caveat.

“Even if you’re in regular personnel or your sub defense, your gap integrity stays the same,” McGriff said. “We definitely have to be consistent fitting our gap, owning our gap and playing downhill.”

Ole Miss likely won’t have to wait long to see if any progress has been made in trying to heal its gaping wound.

“If you’re Arkansas,” McGriff said, “you wouldn’t do anything else but come in and try to run the ball early and test the run defense.”

Oxford hosts Hernando with playoff hopes on the line