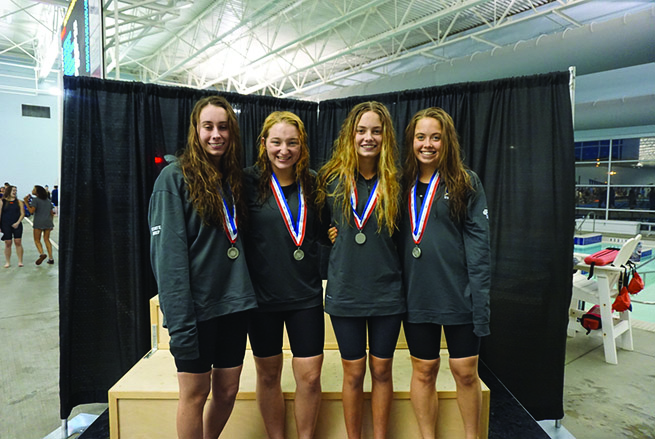 There have been large strides taken in the pool by Oxford this season.

Steps forward in each meet have proven the program is heading in the right direction.

At Saturday’s Class II state championship meet held at the Tupelo Aquatic Center in Tupelo, the Chargers showed they are becoming one of the state’s best.

“Our goal going into the meet was a top-five performance,” Oxford coach Robert Gonzalez said. “I thought we’d be able to do that on both sides.”

It was an even more impressive finish for the boy’s as they had to overcome losing one relay team early in the day.

The boy’s 400 freestyle relay team was disqualified in the morning session, putting the Chargers down a race and losing potential points.

“They had to overcome losing those points and they were able to do that by surpassing what their projections were in several other key events,” Gonzalez said. “I’m excited for the boy’s team to move up from 12th to fifth this year. Just seeing some of those seniors, Harrison Tann, Graham Norris, be able to do things that they’ve never been able to do before.”

The top finish for the boy’s team was a second place finish in the 200 freestyle relay. The team of Tann, Norris, Bryce Goszkowisz and Will Carrington gave the Chargers their only podium finish.

Other notable finishes for the boy’s team were a fith-place in the 200 medley relay with a team of Tann, Norris, Carrinigton and Vance Byars. Goszkowisz placed sixh in the 100 freestyle and seventh in the 50 freestyle.

In the 100 breststroke Norris took fifth while Carrington and Tann too sixth and eighth, repsecteively.

Girls improve
After a seventh place finish in 2016 the Oxford girl’s team took hom a top-five finish of their own, placing fourth with 45 points.

Kate Byars was the top performer for the girl’s team with a second place finish in the 50 freestyle.

“On the girls’ side they were just really, really consistent,” Gonzalez said. “All the relays moved up. I was pleased with that. Kate Byars 50 freestyle, that was a big moment for her.”