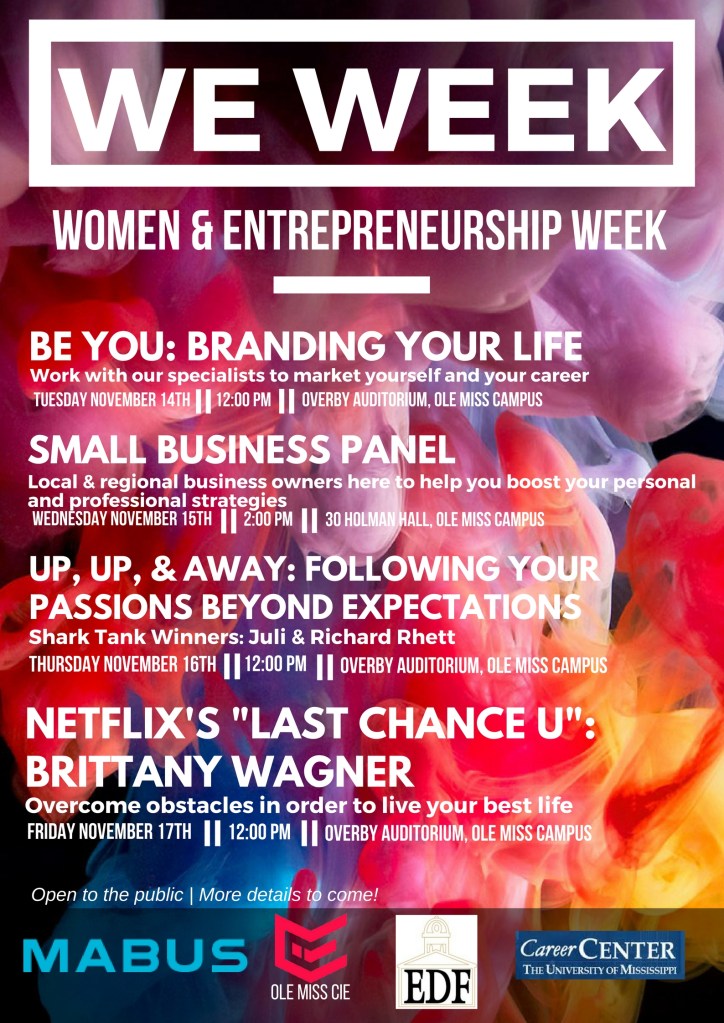 A new, week-long event is coming to the Ole Miss campus and it looks to promote women in entrepreneurship.

The event starts on Tuesday, Nov. 14 at 12 p.m. with regional experts coaching attendees on how to best market themselves in their careers. The rest of the week includes a panel discussion with small business owners and a lecture from “Shark Tank” winners Juli and Richard Rhett, owners of Sierra Madre Research based in Vicksburg, Mississippi. The final day will host Brittany Wagner from Netflix’s “Last Chance U,” filmed at East Mississippi Community College.

Cobie Watkins, the Director of Student and Alumni Programming in the Center for Innovation and Entrepreneurship, says the center has wanted to do an event like this for almost two years now, “to show women that entrepreneurship isn’t just a man’s world.”

“We want them to see that businesswomen can be just as successful in this field as businessmen,” she said. “We brought the Career Center on as a partner because they have a similar interest in promoting entrepreneurship as a growing and vibrant career field.”

Watkins says that, recently, more women have entered the entrepreneurial market. From 2012 to 2015, the number of women in the field rose from 36 to 42 percent.

The event intends to encourage students and community members to go after careers in a healthy and successful way.

“We also believe entrepreneurship and entrepreneurial careers are going to continue to shape the future economy of the state and region, and believe the speakers and panelists are wonderful examples of this,” Watkins added.

She said that “more young women see the value in creating something meaningful and successful — and not only becoming the next Steve Jobs. But of course, that would be fine, too.”

“I also think that more people aren’t finding some of the fulfillment they thought they would from traditional careers, so they’re making it themselves,” Watkins said. “Not to mention, creating businesses creates jobs and that’s a huge win for everyone.”

Gameday shuttles to start at 6 a.m.