Water Valley storms back, defeats South Pontotoc to advance in 3A playoffs 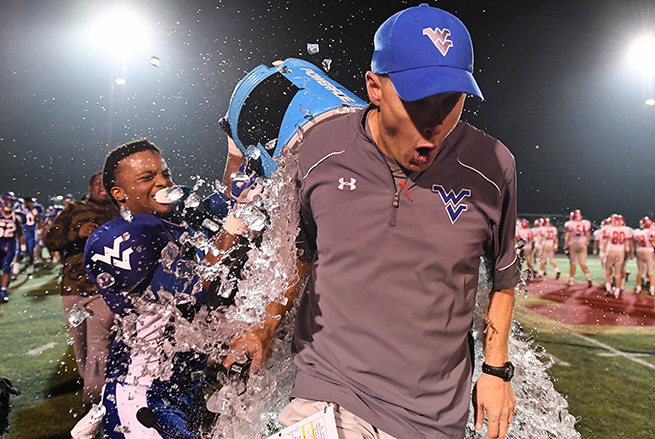 Water Valley did more than win their playoff game against the South Pontotoc. Fifty unanswered points and a 24-hour postponement made head coach Brad Embry, the winningest coach in Blue Devil history.

The Blue Devils defeated South Pontotoc 50-22 on Saturday to advance to the second round of the Class 3A playoffs. The game started on Friday but was halted in the first quarter due to inclement weather. It was then moved from Bobby Clark Field in Water Valley to William L. Buford Stadium on the Lafayette High School campus.

“I am really proud of my guys. I love this team,” Embry said. “When you play a team like this and manage to stay composed and came out playing the way they did tonight, you have to appreciate the effort.”

The game may have started in favor of South Pontotoc after a hook and ladder gave them a one score lead, eventually extending to two scores, halfway through the first quarter. Twenty-four hours later, the lead would increase to three scores after a Cougar fumblerooski gave South Pontotoc a 22-0 lead.

The second quarter was where the Blue Devils (8-4) found their groove and manage to shift the energy of the game. While the massive gap in the game might have hurt the Blue Devil chances, it proved to be a benefit.

“We went back and watched film after the delay and made adjustments that we thought made a huge difference,” Embry said.  “They are a formation team so coach Roberts and the defensive staff went back, watched film, and came out lined up how we felt best.”

With the defense hunkered down, the Water Valley offense was ready to start scoring.

The Water Valley offense was dictated by their running game and Kenterrious Rucker played like a man on fire. Every play, Rucker kept his legs moving and broke tackle after tackle. On more than one occasion, Rucker single-handedly saved plays from ending and turned multiple opportunities into scoring chances.

Rucker was not the only Blue Devil who caused problems for South Pontotoc (8-4). Martavius Rockett was simply too fast and whenever the defense allowed him to reach the corner, he burned them for a big play on more than one occasion.

Water Valley’s offense wasn’t the only dominating force in this game. The Blue Devil defense letup early, but during the second half would prove to be an immovable force.

The Blue Devils kept the Cougars out of Water Valley territory most of the second half and turned a 22-point deficit into a 50-point swing in favor of the Blue Devils. While the game was hostile from beginning to end, tensions rose as the game went on, but Water Valley managed to cruise to a dominating victory in unfamiliar territory behind big plays on both sides of the ball.

After beating South Pontotoc, Water Valley will travel to undefeated Yazoo County (11-0) to face the Panthers.

Water Valley lands players on MAC 2-3A All Division…