Ole Miss soccer returns to NCAA Tournament, gets Florida State in first round 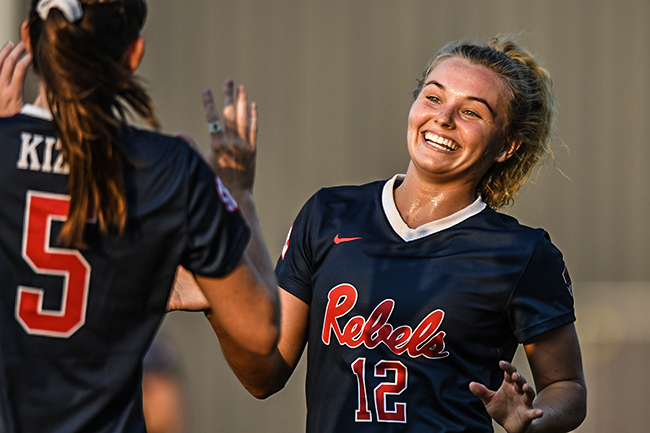 Ole Miss' Channing Foster (12) celebrates her goal in the 20th minute with teammateCeCe Kizer against Southern Mississippi at the Ole Miss Soccer Stadium in Oxford, Miss. on Sunday, September 3, 2017. Foster scored three goals in the match, which is her second hat trick of the season.

Ole Miss’ soccer team is back in the NCAA Tournament.

After missing out on the field of 64 last season, the Rebels were included in this year’s bracket when it was announced Monday. Ole Miss will travel to Tallahassee, Florida on Friday to take on Florida State, the tournament’s No. 4 overall seed, at 6 p.m.

It was an anxious eight-day wait for Ole Miss (10-6-3) after being bounced in the first round of the Southeastern Conference Tournament with a 1-0 loss to Arkansas on Oct. 29, leaving the Rebels with just one more conference win than they had last season. But an RPI of 40 in arguably the nation’s strongest league — the SEC put nine teams in the field — was good enough.

“Gut-wrenching,” Ole Miss coach Matt Mott said of the wait. “Really tight. Really nervous about where it’s going to end up and where you’re going to play and all those things, but the idea this team gets another game is really exciting.”

Neither team is going into Friday’s tilt with much momentum.

Fresh off a first-round exit in the Atlantic Coast Conference tournament, Florida State (11-6-1) has won just one of its last five matches while Ole Miss’ last win came six matches ago against LSU on Oct. 8. Three of those matches for the Rebels were 1-0 losses while the other two were double-overtime draws, leaving Mott feeling good about the way his team is playing heading into the tournament despite the lack of results.

That’s especially important against a Florida State team that limits teams’ chances by playing keepaway with its ability to possess the ball, Mott said. Ole Miss, one of the nation’s top offensive teams all season, will counter with two of the SEC’s top three scorers in CeCe Kizer (16) and freshman Channing Foster (12), but the Seminoles, who’ve won six of their eight home matches, have a threat of their own in forward Deyna Castellanos, whose 15 goals rank sixth nationally.

“They’re probably the best possession team in the country, so their ability to keep the ball will be something we’ll have to deal with and know they’re going to have the ball some,” Mott said. “I think being able to be good defensively in and around our 18-yard box is going to be real important. We don’t want to give up an early goal. We want to get into the game and see if we can hang on or create something to be dangerous late in the game.”

Ole Miss made history with its last tournament appearance, advancing to the Sweet 16 for the first time in program history. Mott said consistency and health helped the Rebels make that run two years ago.

“Just playing as a team, playing as a unit, and focusing on what we’re good at,” senior midfielder Bella Fiorenzo said. “Just taking risks and having the confidence to go out there and put our hearts on the line and see what happens.”

Watch Mott talk about his team receiving an at-large berth and the additional challenges Florida State will present in the video below.