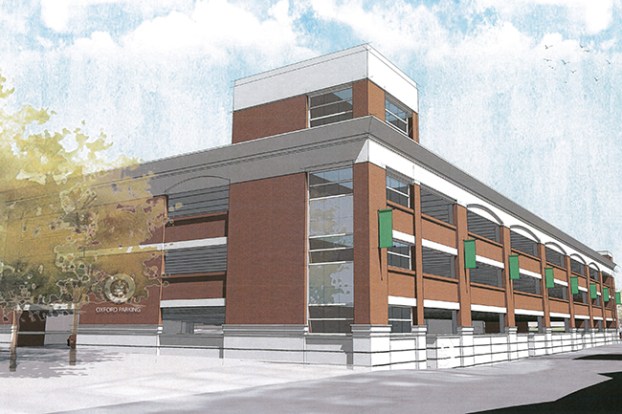 The new downtown parking garage has already been approved by the Board of Aldermen and the Parking Commission pending the approval of another Oxford board — the Courthouse Square Historic Preservation Commission.

On Monday evening, Leigh Ann Black, of Eley Guild Hardy Architects, came to the commission to present the proposed design and ask for a Certificate of Appropriateness. The garage will replace the lot adjacent to Jefferson Road on the Square and will be four levels high with 484 spaces within the structure.

Multiple questions were raised by the Commission during the evening meeting. One of the biggest was that the parking structure might bear a little too much of a similarity to City Hall.

“Imitating existing buildings is against the rules,” said Tom Howorth, on the commission, among other criticisms. “I don’t think we want to equate a City Hall with a parking garage. If you told me this was a parking garage for an institutional building, I would begin to ask which denomination it belonged to.”

Commission member Dorothy Laurenzo inquired about lighting the garage and if light pollution would affect the neighborhood near it.

“At this stage in the design we’re looking at what the exterior lighting would be,” Black said. “(We’re) looking at lighting that is similar to what you’d see on North Lamar. I think the best option would be to come back with a lighting expert.”

Casey Rogers, with Innovative Construction Management, also spoke to the commission and assured them that they had worked on studies regarding the garage and its potential light pollution.

Black agreed to return for another meeting to ask for an additional CoA for lighting.

Ultimately, the commission passed a CoA for the structure with the expectation that Black would return with plans for lighting. Out of the four members of the commission present, Howorth was the sole member to vote against it.

The results and aftermath of the presidential election that took place a year ago revealed that America was perhaps more... read more