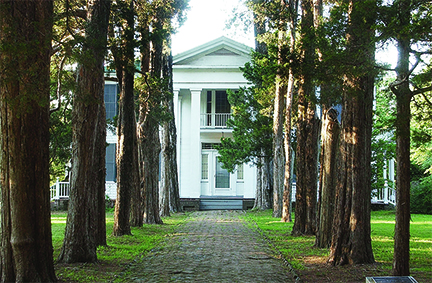 An English class from Western Kentucky University got an up close and personal look into the world of an author they’re studying: William Faulkner. And for their professor, Walker Rutledge, there’s no better way to educate them about the writer than with a visit to the place he lived.

Since 1992, Rutledge, a professor of English at WKU, has led his class through locales pertinent to Faulkner’s writing. The class got to see Rowan Oak, the Ole Miss campus among other Oxford sites.

“(The trip) makes the material come to life,” Rutledge said, as he drove his van of students around town. “There’s no substitute for it.”

Rutledge says that with each trip he has always learned something new about Faulkner and about the town itself.

The students also got a tour of the College Hill Church and cemetery behind it from longtime College Hill resident Janie Frierson. She told them about Faulkner’s marriage on the church’s steps since he was not allowed as an Episcopalian to marry a woman who had been divorced.

Rutledge’s students were grateful for the trip that helped open their eyes to Faulkner’s world.

“Having read a bunch of Faulkner now and seeing the place that inspired his novels is enlightening,” Dillon McCormick, a sophomore said. “Getting that insight of who Faulkner was as a person and then, by proxy, what his literature about was interesting.”

Student Casey Thornsberry says the trip brought her closer to the author.

“When you’re reading this author’s work, you’re very distant from him,” she said. “You can only learn so much by reading a biography. Being here and seeing the places he wrote about was really cool and brings you closer to understanding the work.”

Anna Zaitseva, a Fulbright Scholar at WKU from Russia, had read Faulkner’s “The Sound and The Fury” before, but it was hard for her to place it in an American context.

“I’ve read it in Russian and it was so not relevant to our culture,” she said. “We never had an issue of being concerned about slavery. It was interesting to me to see the place where it all happened and now I feel that I’m closer to that.”